Coping: The fact that someone is rude to you doesn’t mean that emulating them is the only possible response 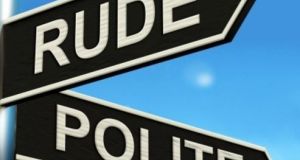 ‘The mantra of politeness is robust and important’

Many people dislike references to Thomas Jefferson because he is, to quote that ubiquitous word, “problematic”. He was a polymath, draftsman of the US Declaration of Independence and third president of the United States. He was also a slaveholder, a position which should be unconscionable to anyone alive today.

Despite his possession of some quite unforgivable flaws and committing of terrible acts, there are also some positive ideas to take from Jefferson’s life and ideas; the simplest and most useful of which is politeness.

It sounds a rather watered down concept, evoking moments when you have to thank someone through bitten cheek on receipt of an absolutely terrible gift, like a watercolour nude portrait of Charlie Haughey, or Ivanka Trump’s book on women “having it all”.

Really, though, the mantra of politeness is robust and important – maintaining equanimity without compromising your standard of how others deserve to be treated is an important life skill.

We worsen ourselves when we give in to the temptation to be impolite. Of course, if we are in danger, we always have the right to defend ourselves, but if someone is just making it very difficult to maintain good humour and manners, that is not a legitimate excuse to be rude or verbally abusive. The fact that someone is rude to you doesn’t mean that emulating them is the only possible response.

Sometimes, however, it is cripplingly difficult to remember that, because some people are, to use a term that is not very Jeffersonian, utter asshats. On an average day, the most negative experiences most of us have with others (provided we are not in the midst of a particularly damaging or unhealthy relationship with someone close to us) are characterised by the other person’s benign disinterest.

When we walk down the street, our default setting is often to view the strangers milling about us as bit players in the solipsistic play of our lives. They are not fully human to us until something snaps us into recognition of their equal humanity.

Occasionally, though, we meet people who possess a conscious default setting that everyone else, or some particular “type” of person, is somehow less. Worse still are those who truly believe that they are being polite because they observe basic rules around social interaction while verbally slathering you in the bigoted assumptions that underlie their attitude, leaving you feeling greasy and sodden, like a limp piece of over-buttered toast.

Like most of us, I have the resilience to withstand a bit of random rudeness from others. If someone close to me is a negative influence or continually unkind to the point of causing harm, then I will probably part ways with them, depending on the circumstances.

With casual encounters, someone being a bit of a shite to you (I tried to come up with a more technical phrase, but this one rings true in the gut) isn’t worth taking on board. They are having a bad day and their rudeness is not connected with you. It is the in-between people who are challenging; the ones you haven’t expressly invited into your life but who are there anyway on a regular basis – the colleagues, co-workers, neighbours. The other parents at the school gate. The college classmates. For the sake of peace and cohesion, we can’t tell these people to go and do one, even though we may wish to.

When my elderly neighbour asks me for the 20th time, with wrinkled nose and an aura of vague but evident disgust, how my “certificate in fashion” is going (it is actually a PhD in early modern philosophy), I take genuine pains not to point out that his 30-year-old corduroy trousers should be impounded by the Government.

When he says that our flower bed isn’t coming along well (I know it isn’t – I’m inside all day trying to finish a PhD in early modern philosophy), I smile pleasantly. When he tells my partner (who works a 100-hour week) that young people like us are all lazy and aimless, he nods amiably.

Jefferson said that good humour is the higher virtue – politeness is artificial good humour pulled from the depths when you can’t muster the real thing. Sometimes, it will do.