One of State’s most experienced search and rescue airmen 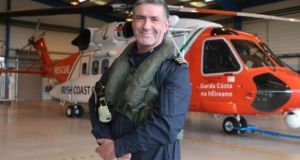 Daithí Ó Cearbhalláin’s passing occurred on the 27th anniversary of a rescue mission which he was decorated for, where he and his Air Corps colleagues assisted a fishing vessel in trouble in treacherous seas off Donegal. Photograph: Brian Arthur/ Press 22

Daithí Ó Cearbhalláin, who has died after a short illness, was one of the State’s most experienced search and rescue helicopter airmen, and a committed family man with a passion for music and the Irish language and an inimitable sense of humour.

His passing in Co Clare occurred on the 27th anniversary of a rescue mission which he was decorated for, where he and his Air Corps colleagues assisted a fishing vessel in trouble in treacherous seas off Donegal.

He was born in Manchester as the youngest of four children, and reared in Coolock in Dublin. He enlisted with the Defence Forces and was stationed in the Curragh when he met his wife, Dara – both aged 20 at the time. The couple married in May 1990 and moved to Leixlip, Co Kildare .

He was accepted into the Army Ranger wing, but fulfilled a dream when he transferred to search and rescue with the Air Corps. The flight sergeant became a key member of winch crews on many missions, initially flying with the Alouette helicopters and then moving to the Dauphin which was equipped for night rescue.

The Distinguished Service Medal the State conferred on him was for his role in assisting the Locative, a 65ft fishing boat with four crew on board which lost engine power and was taking in water off Arranmore Island, Co Donegal, on the night of March 8th/9th, 1990.

In darkness and with an enormous swell, the RNLI Arranmore lifeboat coxswain John O’Donnell had to pull the fishing vessel around to allow a safe approach from the helicopter flown by Jurgen Whyte, now Air Accident Investigation Unit chief investigator.

His second award was from the British Shipwrecked Fishermen and Mariners’ Benevolent Society Award in 1992, for the rescue of crew from the French-registered fish factory ship Capitaine Pleven II in Galway Bay the previous year.

A British RAF helicopter was also tasked to assist as there were 57 on board. The situation was so calm for the crew staying with the ship until the tide turned that the winchman was able to take a photograph – a rare occasion in a search and rescue situation.

Ó Cearbhalláin moved to the Irish Coast Guard in 2002, working for CHC Ireland which had secured the Government search and rescue contract. By that time, there were four search and rescue bases: Dublin, Shannon, Waterford and Sligo. Dara and the family moved over with him to Feighquin, near Quin, Co Clare, in August 2003.

He became senior crewman and then chief crewman, responsible for standards and management. One of the projects he was involved with was recruiting “street paramedics” to become winch crew on helicopters. The model was so successful that it was copied by services in other countries.

In 2015, he decided to return to flying – a job he really loved, he said. At this stage, the Irish Coast Guard had begun leasing Sikorsky S-92 helicopters, through CHC Ireland, with longer range and a very advanced inpatient care system .

“The slagging was the worst. The senior crewmen and women in Shannon were only delighted to be able to put me through my paces,” he said of his return, in July 2015.

Every July for the last 16 years, he travelled to Tramore, Co Waterford, to remember former Air Corps colleagues Capt Dave O’Flaherty (30), Capt Mick Baker (28), Sgt Paddy Mooney (34) and Corporal Niall Byrne (25), who died in a crash on return from the first night mission at the Waterford search and rescue base in July 1999.

Ó Cearbhalláin was a close colleague of the crew of Rescue 116 – Capt Dara Fitzpatrick (45), Capt Mark Duffy (51) winch crew Paul Ormsby (53) and Ciaran Smith (38) – who died off the north Mayo coast on March 14th this year, just three days after his funeral.

Ó Cearbhalláin was passionate about the Irish language, music and sport and committed to his wife and family. He brought his daughters, Aoife (24 ) and Niamh (21), to every single Harry Potter film when they were young, played music with Conláed (17), trained a junior GAA team involving Tomás (14) and went on walks with Cuan (8), who recently made his First Communion.