‘Dads feel guilt too. I don’t know if it's the eviscerating guilt mothers feel’

Jennifer O’Connell: Our life has been a blur of too many events that feel more important than taking small girls to parks 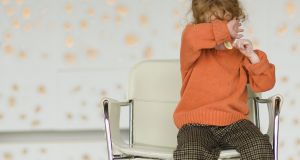 The three-year-old doesn’t hate me; she wants more of me. And that makes it worse. She sobs into my chest, and I cry into her curls. Photograph: Getty Images

The three-year-old is implementing a period of industrial action. She doesn’t want to brush her hair. She doesn’t like her socks. They’re melty, she says, with disgust. They’re bumpy.

Also on the list of things she objects to this morning is brushing her teeth, the radio, crunchy toast, labels, her winter coat.

Can it be a mummy and daddy day, she asks.

I hate you, she says.

Then she dissolves into tears. Don’t think I’m a rude girl, she cries, her hot little head burrowing into my chest.

I know what this is about. I’ve been working too many hours. Far too many times lately, I have crept out of the house when the day is still just a crimson slash in an inky sky, and crept back in when everything is silent again, and lunchboxes have been washed out and homework signed off, and stories about playground antics and incidents in the classroom already spilled out in a torrent of happy words, and the bedtime stories told and sleepy heads kissed. And I wasn’t there.

For what feels like weeks, our life has been a blur of deadlines and packing for a house move and too many events that feel more important, in that particular moment, than taking small girls to parks. At weekends, I’ve been spending long hours hunched over my laptop. By the time you read this, we’ll have moved house again. The older children understand it is temporary, it will pass, and I’ll be back dropping them to school and picking them up and nagging them about homework and making plans for birthday parties that are still six months away. But that kind of reasoning is beyond her.

So I understand. I do. I have been here before. She doesn’t hate me; she wants more of me. And that makes it worse. She sobs into my chest, and I cry into her curls.

Mother guilt never gets better. Dads feel guilt too, but I don’t know if it is the bruising, eviscerating guilt mothers feel. Figures were published recently which showed that growing numbers of Irish women are deciding not to return to work after their third child. After their second child, two thirds of women work outside the home. But only 56 per remain in the workforce after their third child; the rest decide to stay home.

‘Deciding’ makes it sound like a positive, empowered initiative, like they’re leaning out to lean into their families. And for some it is. But the reality is often messier. They’re choosing to not return to work because they can’t afford childcare, or because they have finally given into the law of physics that means they can’t be in three places at once, or because they can no longer bear the tears at drop off, or because they can’t stand all the things they’re missing, or because of all of these things have collided at once, and they can’t see a way through, and the track they worked so hard to get on doesn’t seem to be leading anywhere they actually want to go anymore.

When I worked part-time, I was guilty about everything – I wasn’t showing up enough at work or for my children or for myself

It doesn’t have to be like this: in Sweden, 85 per cent of mothers of three work, and in Denmark the figure is 83 per cent. So the laws of physics can be tilted in our favour with decent, affordable childcare and flexible working hours.

I did it in reverse. It was after my third child that I returned to work full time, after a decade of working part-time, in the evenings, on weekends, when they slept, or went to school. It was time – financially, mostly. Buying a house in Dublin on the eve of the property crash, like many of our generation, means we don’t have the luxury of thinking too much about these things. But there was a part of me, a part I’m slightly ashamed of, that leapt at the opportunity. I love work.

When I worked part-time, I was guilty about everything – I wasn’t showing up enough at work or for my children or for myself. Now my guilt is concentrated on my children. Is that progress? It doesn’t feel like it. Somebody forgot their violin again. We didn’t make it to the school book sale. I wasn’t home when my son got sick. I haven’t managed to pick the small girl up from Montessori in too many days.

Don’t beat yourself up, my friends say. You’re doing your best.

I think I’ll do something less stressful when I grow up, the 11-year-old says.

This is supposed to be our ‘downstressed’ life, my husband says.

I hate you, the three-year-old says.

Later in the day, her childminder texts me. She doesn’t want you to pick her up too early, she says.

I pick her up early anyway. We go home and make Play Doh ice cream and climb into her bed and read a book. Say nice things, she says, as she gets sleepy. So I do.

Let’s have a mummy and daddy day tomorrow, she says, as sleep takes hold. I promise we will. It’s not really enough. But for now it will do.