‘Dear Jennifer, I write to end our treasured relationship’

Jennifer O'Connell: The yellow legal paper he had chosen was ripped along its seam 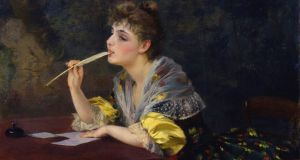 These letters were not just letters; they were highly contrived, insufferably self-conscious miniature diaries, stretching over several days, and featuring scrawled quotes from Keats or Beckett, or whoever was on the Leaving Cert that year. Photograph: Fine Art Images/Heritage Images/Getty Images

I can still recite it, almost word for word. “Dear Jennifer,” it opened in his distinctive spidery hand.

“It is with a heavy heart that I write to let you know I must end our treasured relationship.”

The yellow legal paper he had chosen to deliver this devastating blow was ripped along its seam, which I interpreted as indicative of his anguished state. It had not been an easy decision, he went on stoically. The news was unexpected, but that “treasured” ignited a tiny thrill of hope. Sure enough: a reconciliation followed, swiftly succeeded by another yellow letter. This time he was “shattered” to break off our “precious” relationship. A few weeks later, he came back – or at least our friend Dave did – brokering peace via the medium of a Chomp bar.

We were 12. We broke up and got back together seven times, managing to never once have an actual conversation. Our treasured relationship consisted of holding hands in stunned, mute silence three times. The whole point of it, for both of us, was the tortured composition of those letters. (I googled him while writing this: of course he has grown up to be a writer.)

I have no recollection of what I said in the ones I sent back, but I am confident they were every bit as emotionally wrought: equal parts Yeats and philosophical musings inspired by graffiti on the back of the toilet door.

Imagine, a 2015 study found that four-fifths of today’s teenagers have never written a love letter

Of all the things the children of the digital revolution are missing out on, the one I most pity is the teenage love letter. There’s nothing like the joy of opening a Basildon Bond envelope stuffed with foolscap pages folded into tiny squares, like some pubescent form of origami. These letters were not just letters; they were highly contrived, insufferably self-conscious miniature diaries, stretching over several days, and featuring scrawled quotes from Keats or Beckett, or whoever was on the Leaving Cert that year.

They offered a smorgasbord in blue Bic of existential angst and overworked metaphors; lines from the Cure or Morrissey or Tracy Chapman that were supposed to convey how we felt when the metaphors wouldn’t cut it, and, when we got bored bleeding coruscating brilliance onto the page, complaints about teachers or the food or our homework. They were anguished declarations of love and longing, and sometimes they were the unmistakable signs of imminent friend-zoning. (“I have met this really cool girl called Deirdre. You would like her.”)

I doubt whether Barack Obama would have actively chosen to share his college love letters with the world, but thankfully he wasn’t given the choice after they were recently donated to Emory College in the US. The letters to his former girlfriend, Alexandra McNear, are fine examples of the genre – filled with high pretension and Yeats references. (It turns out that quoting Yeats was not just an Irish affectation.) “I trust you know that I miss you, that my concern for you is as wide as the air, my confidence in you as deep as the sea, my love rich and plentiful. Love, Barack” he wrote, excruciatingly, gloriously.

“A young black man with his arm behind his head, staring at the ceiling with moist eyes, and a young white woman resting her head on his arm, alone and facing the swirling expanse, outside the room, inside themselves, separate in the eye of the storm,” he wrote on another occasion, presumably high on Brontë or Shakespeare, or something much more fun, as he imagined their love as an Egon Schiele painting. Later, their relationship entered the dreaded gentle relegation to second-division phase, and he composed the inevitable ‘it’s not you, it’s me’. “I think of you often, though I stay confused about my feelings. It seems we will ever want what we cannot have; that’s what binds us; that’s what keeps us apart.”

Imagine, a 2015 study found that four-fifths of today’s teenagers have never written a love letter. One third of them have never written any letter at all. They don’t need to. They Face Time and send each other selfies and gifs and Insta stories about their walk home from the gym. When they’re really keen on someone, instead of lines from Yeats, they might send pictures of their genitalia on Snapchat.

Look, I know I’m old. I realise it’s not Victorian times anymore. I know experts predict writing will soon become obsolete anyway. For all I know, emojis may be just as authentic an expression of affection as quoting Byron or Rumi; they’re certainly more efficient. But there’s something about a physical love letter that makes every other form of communication seem disposable and anaemic by comparison.

I have a box of the letters I got as a teenager and young adult that has travelled around the globe with me. They are touching and hilarious and excruciating. I’ve no desire to see the ones I wrote in return. It’s enough to know that teenage me might exist in someone’s attic or garden shed, still spouting overworked metaphors and pretending to get Bob Dylan.