Barbie in a hijab: one small step towards embracing toy diversity 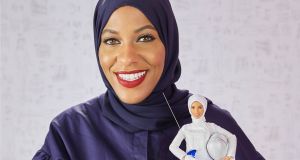 US Olympic fencer Ibtihaj Muhammad holding the first hijab-wearing Barbie based on her to be released in 2018, in New York City. Photograph: EPA/Mattel

Mattel has launched its first Barbie in a hijab. The doll is inspired by a real woman – Olympic fencer Ibtihaj Muhammad, who was the first American to win a medal wearing the hijab.

“Today, I’m proud to know that little girls who wear a hijab and, just as powerfully, those who don’t, can play with a Barbie in a headscarf,” said Muhammad.

The doll is 10th in its line of ‘Shero Barbies’, a range based on real life “female heroes who inspire girls by breaking boundaries” and designed to encapsulate a fuller representation of humanity. The range has previously included doll-size tributes to Selma writer/director Ava Duvernay and so-called “plus-size” model Ashley Graham. Not yet offered in the line of ‘Sheros’ is a harassed working mother, who is 5ft 4in with a wobbly tummy, and comes with chipped nail polish, a battery operated whining toddler, and free miniature Cheerios to sprinkle in her hair. But we can live in hope.

Meanwhile, the Irish toy manufacturer, Arklu, has just launched the world’s first doll with a cochlear implant as part of its range of Lottie Dolls. Arklu’s Finn and Lottie dolls are ethnically diverse, designed according to the dimensions of actual children, and eschew accessories such as nappy bags and rainbow wands for fossil hunting sets. Importantly, the Mia doll has an identity beyond her disability – she is a wildlife photographer who comes with wellies and a camera, and just happens to have a cochlear implant.

Lego has also launched a set of minifigures celebrating four of the women who were instrumental in shaping the Nasa space programme, and last year offered its first ever minifigure in a wheelchair.

Are these the first signs of a long-overdue revolution in children’s toys? Are we at last moving away from the imagination-stifling tyranny of the pink and blue aisles, towards a broader, more inclusive vision of childhood?

In a word: no. The Shero Barbies, women of Nasa Lego sets, and Lottie dolls ranges are beacons of diversity in a world that remains determinedly ableist in its outlook, and rigidly divided along gender lines.

Barbie began revamping its image amid slumping sales last year, when Mattel released a broad assortment of dolls in a greater number of skin tones, eye colours and facial structures to acres of positive coverage. But through she may have moved on from the days when she declared “math class is tough”, a glance at Barbie’s Twitter page reveals that her priorities remain riding her unicorn carriage, baking cupcakes and singlehandedly promoting the tiara as a practical and stylish fashion accessory. (It’s telling that many of the Barbie Shero dolls are not being made available to the general public.)

The reality is that shopping for children’s toys is still, for the most part, a profoundly dispiriting experience. Girls continue to be funnelled into pink aisles, where they are told their interests are primarily focused on cleaning, crafting, and caring. Boys are ushered to the blue aisles, catering to their presumed aptitude for creating, exploring, building, racing and smashing.

We are so excited to honor @IbtihajMuhammad with a one-of-a-kind #Barbie doll! Ibtihaj continues to inspire women and girls everywhere to break boundaries. #Shero #YouCanBeAnything #GlamourWOTY pic.twitter.com/oV0e6ClgL6

3, 2, 1.... The @LegoNASAWomen set has officially cleared the tower! Happy release day to all. Hope you enjoy... Pls share your pics! 🚀 pic.twitter.com/KO9AknhFKv

The explanation for this kind of gender segregation ranges from “it’s natural” to “this is how it’s always been done”. The truth, of course, is that it isn’t, and it hasn’t.

In Victorian times, both boy and girl babies were usually dressed in white gowns, and it wasn’t until the 20th century that rules began emerging for pink and blue. Even then, some saw blue as a girl’s colour because of its association with the Virgin Mary. It was only after the 1970s that toy and clothing manufacturers began pushing pink for girls and blue for boys.

Of course, some girls prefer tea sets and buggies some of the time; just as some boys prefer kicking or building or blasting things. But those same boys might enjoy playing with dolls some of the time too, while their sisters might also enjoy taking aim with a Nerf gun.

The Lottie Mia doll is one of only a tiny handful designed to be relatable to the world’s 150 million disabled children. Many of the others – Amazon has a Friends with Diverse Abilities Figure Set for $24.99 (€21.16) – are so pointedly earnest that it’s hard to imagine any child voluntarily playing with them. Meanwhile, the concept of a family in the world of children’s toys remains firmly rooted in the nuclear. One US start-up is attempting to challenge this with a range of magnetic wooden blocks that children can assemble to create a family that reflects the genders and ethnic origins of their own, but My Family Builders are not yet available in Ireland.

Though the children’s toy market seems stubbornly resistant to the pressures of a more diverse world, every year brings a handful of toys offering a less restrictive view of children’s abilities and interests. And they aren’t all expensive robots. Here’s a selection of our favourites available in Ireland.

Mia by Lottie Dolls (€24.99 from NimbleFingers.ie)

Lottie Doll’s Mia comes with her own photography kit and also just happens to have a cochlear implant. She has dark skin, and dark brown wavy hair.

Triangular and square pieces magnetically connect to help you create balls, houses and more. Suitable for ages three and up, but kids of all ages will probably enjoy playing with them.

A science lab for three-year-olds sounds like a recipe for trouble, but the Kids First Science Lab allows even the youngest kids to experiment freely with a variety of safe, engaging and durable science tools, including a 14-piece screw-together system with tubes, funnels, lids, connectors, and perforated disks. The kit comes with a manual for parents.

A book that shows children how to build eight simple machines that can be combined to set off a chain reaction.

Fun card game based on women leaders in science.

Plan Toys are made from sustainable rubber wood and are safe for young children. The range of solid, bright wooden toys features doll families which, although they include a mother and father option only, do come in light- or dark-skinned versions.

24 hours in Bundoran: ‘The town is mental. No one expected it to be so busy’
7 Tesla wants an electric Golf rival
8