Cycling in Dublin: ‘We’ve lost our way with private cars’

In 2013 the Irish capital was ranked among the world’s top 20 bike-friendly cities, but only a small part of the promised cycle network was ever built 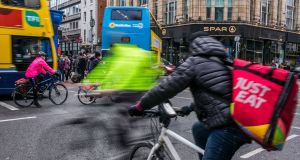 One sunny May afternoon in Dublin, as the Spice Girls prepared to kick off their Spice World 2019 tour at Croke Park stadium, the coaches bringing their fans unwittingly sparked another reunion – the city’s cycle activists.

It had been two years since the direct action group I Bike Dublin had mobilised to protect cycle tracks from car parking – uniting around twice a week under the hashtag #freethecyclelane – but as police officers directed coach drivers to park in the bike lane by Dublin Bay, blocking the track, the protesters were back.

One of them, Stephen McManus, sat down on the cycle path with a sigh. “Cramp, is it?” asked his friend. “Yeah, in my toe,” the man on the ground agreed with a smile.

He was soon joined by 80 people, who formed a long protective line to keep the entire route open for commuters riding home – a human cycle lane. Local campaigner Ciarán Ferrie says they tried to find out who was responsible for the decision but says the bus operators, the gardaí, the city council and the National Transport Authority “were pointing the finger at each other”.

“They have to have a better plan than to close off one of the best cycle lanes in the city during rush hour,” he says.

But parking on bike lanes isn’t the only issue limiting cycling in Ireland’s capital. Back in 2011 and 2013 Dublin ranked in the top 20 of global bike-friendly cities, according to the Copenhagenize index, which praised ambitious plans for a 2,400km network of cycle lanes and a target of 10 per cent of trips made by bike. A couple of years later the city fell off the index and hasn’t returned. What happened to the place once spoken of as “the great hope for emerging cycling cities”?

As the international cycling conference Velo-City returns to Dublin this week for the first time since 2005, campaigners claim a “spate of improvements . . . plastic wands, orca dividers and fresh paint” have appeared on cycle routes close to the conference venue.

Ferrie likens it to the Irish tradition of having a “good room” in the house to show visitors. “There is growing disquiet among cycling advocates that the conference is being used to present a less than accurate picture of the state of cycling infrastructure in the city,” he says. “There is sense delegates are being hoodwinked in a way Potemkin would have been proud of.”

Arriving at Dublin Port by ferry and cycling some of the city’s worst roads between huge lorries, tram tracks and lakes of standing water, it is not hard to see why local cyclists are fed up. Just before the conference centre a pavement cycle lane appears – but even that weaves around and occasionally spits riders out into the path of buses.

The 2013 recession was a major blow to cycle development in the city. With council funds for transport schemes gobbled up by Dublin’s new tram, the Luas, just a small part of the promised 2,400km cycle network has been built. The rest is just faded lines on maps.

“We had great aspirations and plans but unfortunately no willingness to prioritise cycling during the downturn,” says the former Fine Gael councillor Paddy Smyth. “It’s a city that’s relatively dry, it never snows, there’s never any ice on the road. Dublin has the perfect climate for cycling, less precipitation than Amsterdam, less snow than Copenhagen, and they are cities of comparative density.” It’s also mostly flat.

Thanks to congestion, Dublin also has the slowest city centre of any European city, with traffic speeds dropping as low as 6mph.

The council says it remains determined to roll out the 2013 network, and some routes have been built, including the 7km Canal Way, 3km of the Sutton to Sandycove route and 1km on Campshires South Quay. There are plans for a cycle route from the ferry port.

Plans for a cycle path on the one-way River Liffey Quays have been seven years in the making. In places two lanes of motor traffic have been reduced to one, adding an extra bus lane, but cycling remains unpleasant: “advisory” cycle lanes stop and start, used by loading vehicles, crossed by buses and disappearing to leave people on bikes in part-time bus lanes with general traffic.

With a pedestrian boardwalk added to the riverside, councillors have finally agreed on a redesign – but it will be another two years before work on that starts.

Brendan O’Brien, who is in charge of transport in the city, says he is “as frustrated as anyone”. “It’s actually only really this year that we have seen any significant funding allocated for cycling,” he says. “What we have been able to do . . . is not as much as anybody would have hoped.”

It’s not just for lack of funds. In 2016, Smyth, then a councillor, proposed a “quietway” to link neighbourhoods and schools in Rathmines, south Dublin. Frustrated by delays, Smyth began organising public meetings to push the plan, but misinformation quickly spread.

“There was propaganda going around saying I wanted to put a cycle superhighway with Lycra-clad Mamils [middle-aged men in Lycra] coming down the street,” he says. “This was a route designed for three-year-olds on tricycles, mothers with buggies, cyclists of any age wanting to get back on bikes for the first time in 10, 20, 30 years. That public meeting was the closest thing to a lynch mob I have ever been in front of. People were genuinely afraid to speak up, because of the vitriol.”

The proposals never even made it to consultation.

But there is growing pressure to act. Dublin’s economy is booming and recent EU elections increased the number of green councillors in the city from three to 10. “Being seen with a bike has become the new kissing babies,” Ferrie says.

The Green party has a plan setting out a new focus on sustainable transport. Although proposals to make public transport free have not been successful, the pedestrianisation of College Green remains on the table.

There’s also pressure from the multinational tech companies that have made Dublin their European base – among them Facebook, Google, LinkedIn, Groupon and Twitter. Google is among a number of businesses that have signed up to a campaign calling for the 2013 cycle network plan to be funded.

O’Brien says plans to increase the size of the city’s cycling team will “beef up” engagement and reduce the time to get schemes up and running. There is an extra €1.7 million funding for a greenway, and Dublin Cycling Campaign estimates the city will this year spend €30 million on cycling – about 2 per cent of the total transport budget.

The council is also ramping up enforcement of bike lanes, and tripling the number of tow trucks with a specific target to keep bus and bike lanes clear. The problem is many cycle lanes, with dotted lines, are “advisory”, meaning drivers can legally park for 30 minutes to load – a rule O’Brien says “clouds the issue”. He says the city is looking to convert as many bike lanes as possible to “mandatory operation”, with solid white lines so parking is banned at all times.

Copenhagen’s former “bicycle mayor” Klaus Bondam said ahead of this week’s conference that becoming a cycling city by 2030 is within Dublin’s grasp, but it will take “political courage, consistency and significant investment” to reallocating road space from cars to bikes. Whether Dublin will deliver remains to be seen.

Speaking at the opening of the Velo-City conference, the chief executive of Dublin council, Owen Keegan, admitted his city had not done enough to protect cyclists and promote sustainable transport, but said he hoped investment was coming.

“We’ve lost our way with the private car over the last 50 years,” he said. “I hope we find our way back.” – Guardian