Family fortunes: They met, fell in love, and married in Springfield 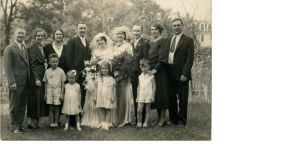 The Coffey/Fenton family wedding photo from 1933

This wedding photo is of my paternal grandparents, Michael Coffey and Mae (Fenton) Coffey and was taken on September 15, 1933 in Springfield, Massachusetts. My grandfather, Michael Coffey, emigrated from Shanaclonn, Country Kerry in 1926 when he was 23 years old; and my grandmother, Mae Fenton, emigrated from Ballincota, County Kerry in 1920 when she was 16. They met, fell in love, and married in Springfield.

All the people in the photo are beloved family members from the Coffey and Fenton sides. Our family is very fortunate that three of the children in the photo are still with us today and continue to enrich all our lives.

It’s amazing to think how much life has changed from 1933 to now. My grandmother, Mae Fenton emigrated, married, and tragically, passed away following the birth of my father. How sad it is that he never had the chance to know his mom.

Unfortunately, one of Mae’s sisters, who also emigrated, had a similar outcome. It’s hard to fathom that their parents (my great grandparents) never saw either daughter again after they left for the US.

Money was extremely tight and phones were not even available. It must have been difficult for my great grandparents to allow their two daughters to emigrate. And, to think that they never had the chance to see or hear the voice of either daughter again. That’s in stark contrast to today’s world where technology allows us to stay in-touch easier and more immediately.

The ability to instantly connect via social media has brought many of us in this large, extended family closer. In 2018, my family (my husband and 15- and 13-year old sons) visited our relatives in Ireland and were able to spend time in the house that my grandmother grew up in, which is still in the family. It was touching to be able to visit where she grew up and also think about how my son, at 15, was one year shy of the age my grandma was when she emigrated. As I look at this photo, I think about the different life experiences that each of them had. Each one has a story of struggle and perseverance. I feel extremely lucky to be part of this family and fortunate that this wedding formed strong family bonds that have continued through the generations.