Can you give this beautiful piano a good home?

Iarnród Éireann, along with piano tuner John Murphy, install a public piano on the southbound platform at Pearse Station in Dublin. Waterford artist Sarah Edmondson decorated the piano with artwork inspired by the Dart's coastal journey. 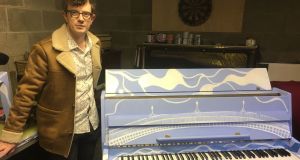 John Murphy, a piano tuner, is the man behind the piano on the platform at Pearse Street Dart Station 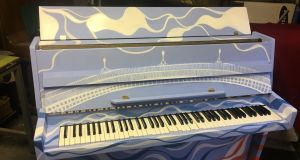 The piano being painted to raise money for the Simon Community

Few would ever describe their workday commute as anything other than a necessary evil, but those who go through Pearse Street station have found their day brightened by a newly installed piano on the southbound platform.

Embraced by beginners and virtuosos alike, the Pearse Piano – a fully working, decorated stand-up piano - is the brainchild of John Murphy, a piano tuner based in East Wall, Dublin. “I moved home from London about a year ago, where I ‘d seen an abundance of public pianos,” he explains. “I wanted to bring the idea to the Irish market. “The Pearse Piano got an amazing reaction, mainly because everyone is so sick of looking at miserable news. Something positive is what everyone wants.” Murphy has married music, art and civic positivity with his latest project: one that he hopes will raise money for charity.

Commissioning illustrator Claudine O’Sullivan to create an eye-catching work of art, using a fully restored piano as a canvas, John will auction their collaboration on Adverts.ie (listed from December 1st until December 24th).

Come Christmas Eve, the piano will be brought down to Grafton Street, where it will assume pride of place at the famed Christmas Eve Busk, often populated by musicians like Mundy, Glen Hansard, Hozier, The Coronas and, on occasion, Bono.

The highest bidder by 6pm on Christmas Eve will become the happy owner of the piano, and Murphy and O’Sullivan will, all going well, walk away with a hefty cheque for the Simon Community.

“It’s sad when seeing people in shop doorways becomes normal,” says Murphy. “It’s terrible, a lot of people don’t want to give money to people directly because they’re not sure where it’s going, but if it’s going to a charity and being used in the right way, that’s the main thing.” Adds O’Sullivan, who divides her time between London and Dublin: “You notice (homelessness) so much when you come home. There’s a problem in London as well, but I notice that things have gotten so much worse when I’m home. Nowadays, it’s people of all different walks and ages. It could be anyone: your next door neighbour, your mum or dad, anyone.”

Murphy is, by his own admission, a man who makes things happen by picking up the phone and ‘chancing his arm’. And as with many labours of love, he has been honing the art of persuasion on many phone-calls. Happening upon an old family piano in a house in Wexford, Murphy contacted the couple – Pat and Helen Bruen – and made a proposal.

“They were selling the piano for €800, but I chanced my arm and explained the project, and they very nicely donated the piano,” recalls Murphy. “It was a family piano, just sitting in the house idly, and while I’m sure they thought I was a bit of a chancer, they wanted it to go to a good cause. I send them photos of the transformation Claudine has done (with the piano) from time to time, and they’re delighted with it.”

It took even less arm-twisting to get rising illustrator/artist O’Sullivan on board. Murphy had long been an admirer of her work, and no wonder. O’Sullivan’s dynamic animal illustrations have become increasingly recognisable, and among her regular corporate clients are Apple and MTV. Though she won’t be drawn on the specifics, the starting bid of €500 on Murphy’ piano is considerably less than the sums that O’Sullivan’s original works usually sell for.

“I figured she’d be busy, but I got lucky,” says Murphy. “Again, I’m a chancer.” O’Sullivan was indeed approaching her busiest time of the year – “I do a lot of print sales and fairs, and clients often want everything done by now” – but she found some elbowroom in her schedule for a labour of love. “It just sounded like a really cool project,” O’Sullivan recalls. “How could I say no? It was just really exciting.” O’Sullivan started with an idea, “a fairytale in Dublin”, and worked from there.

“I didn’t want to make it red or green, or Christmassy, which would look cool in December but maybe not so much in, say, July,” says O‘Sullivan. “I picked the Ha’penny Bridge because it’s an iconic part of Dublin. The rest, I wanted to leave quite free.”

Murphy then put a phone-call into John Sansome at the Simon Community with what he calls his ‘hare-brained idea’, who was predictably bowled over by Murphy’s gesture. For now, the two are scouting for a public, but enclosed location in Dublin’s City Centre to display the piano throughout December to potential bidders.

“That’s the one piece of the puzzle missing for the moment,” says Murphy. For now, the two can only speculate on who the lucky owner of their collaboration will be. Murphy would be only too happy for another family to benefit from the piano’s new lease of life, but would be thrilled to see it go to a public area or workspace, where it could be enjoyed by many people for years to come. “Maybe it would look good in the Google offices,” he says with a smile. “Or I did think the blue would be nice for Facebook. ”