‘I never, ever cry. Then after my mum’s death, there have been ‘why am I crying?’ moments’

Lian Bell and Cian O’Brien discuss their favourite artist, the last time they cried and much more 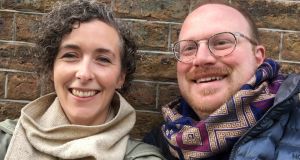 Lian Bell and Cian O’Brien: Cian: I wished my school had home economics. I would like to be able to sew. Lian: You can borrow my sewing machine anytime.

What do you think is your most dominant character trait?

Cian: Controlled isn’t necessarily a negative, but I think that’s fair. I think mine is diplomacy. I’m always trying to keep the peace and not rock the boat. Which is why we work so well together!

Lian: This is now going to show all the horrible cracks in our relationship.

Who would you most like to receive a letter from?

Cian: My mother has all these old postcards from my great grandfather. He travelled all over the place, so I would love to get a letter from him. He had a very interesting life, and a kind of a secret life.

Lian: Where did he travel?

Cian: She has postcards from all over Asia and Africa.

Lian: I’d love to get a letter from my mum. My mum died at the end of last year. We were clearing out lots of her stuff, and she was a real hoarder of everything, so I was coming across things like a package of very sad letters that I had written to her when I was in Irish college. She was a great letter-writer.

Cian: Yeah. I don’t know if you have a go-to drink, but the things I know you drink…

Cian: Guinness, or gin and tonic, or port.

Lian: Or red wine. Or whiskey. A broad spectrum.

Cian: I cry all the time; TV shows, ads, plays.

Lian: I’m totally the opposite. I never, ever cry at anything. Then obviously my mum’s death ... the last year there have been little “why am I crying?” moments. It catches you unawares when you’re doing really random, small things.

Cian: I would like them to legislate for abortion rights for women.

Lian: That’s the first one in my head.

Cian: And to end Direct Provision.

Lian: I’ve got a smock from around the 1950s. My grandmother was a silversmith, and it was her working top.

Cian: When I was Alternative Miss Ireland as Mangina Jones, I had a costume made for me by Joan O’Cleary when I was hosting The Irish Times Theatre Awards. I wanted to dress as the red carpet, so it is a full red velvet suit, with a big sparkly cape, and a huge headdress with the happy and sad drama faces on it. That is my favourite item of clothing! I have worn it actually more than once.

Do you have any motto or mantra you think about?

Cian: Mine is: pick your battles. I literally say that five or six times a day.

Lian: My slightly tongue-in-cheek New Year’s resolution every year was “do everything better”. I’ve had to talk myself away from that, because I end up being like, “Come on! Everything has to be perfect!”

Cian: That makes a lot of sense now, Lian! The other thing I do when everything goes horribly wrong is sing There’s No Business Like Show Business. Kill the tension with a kickline.

What subject do you wish you studied in school?

Lian: Woodwork or metalwork. We had those in school but there was the air of “it’s the boys who aren’t very good academically who go to those”. In retrospect, that is exactly what I wanted to do. I would have loved it.

Cian: I wished my school had home economics. I would like to be able to sew.

Lian: You can borrow my sewing machine anytime.

Cian: My friends all knit. I have these knitter friends, who are men, who knit beautiful things and I feel like I have no practical skills.

What have you dreamed about doing for a long time you still haven’t done?

Lian: I’d love to go back to university and study some kind of craft design, jewellery.

Cian: I wanted to be a diplomat. I’ve also never really travelled on my own, so that’s something I’d like to do at some point. South America.

Who is your favourite artist right now?

Lian: Phyllida Barlow is the British representative at the Venice Biennale this year. She’s in her 70s, and she makes these amazing sculptural pieces that look like she went through a skip and emptied it and stuck everything together in mad colours and it’s just perfect. Obviously there’s a lot more thought that’s gone into it. I’m a total fan of hers at the moment.

Cian: I’m spending a lot of the time at the moment with Una McKevitt who’s a writer and director, because we’re working on a project together. I’m finding her view of the world and way of thinking about how she makes work totally inspirational. I was also really taken with the Romanian artist Geta Bratescu. She’s 101, and the pavilion [at the Venice Biennale] is a survey of her entire career. Stunning.

Lian: France. I go back all the time.

Lian: I have three. One of them I got when I was 18. I saw it in National Geographic – a tattoo that was found on a mummy encased in ice in Siberia. She was covered in tattoos, and this was one of them, a stag.

Lian: Letting life slip by. I know that’s a really heavy worry, but it’s like “come on, you have to do more stuff, time is going, time is going!”

Cian: I worry about that a bit… I stress a lot about work – are you making the right decisions? Are you doing the right things? That’s a source of anxiety.

What word do you most overuse?

Cian: Fabbers. I get a lot of credit for inventing fabbers, but it was actually a friend, Shane O’Reilly. He’ll be happy to be credited in print.

Lian Bell is a set designer and instigator of the Waking The Feminists movement. Cian O’Brien is the artistic director of the Project Arts Centre, Dublin.