Review: This is seductive flavours, faultless cooking in a relaxing, low-key room 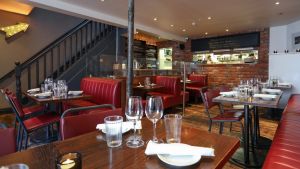 Where do chefs eat on their night off? Etto, which has recently reopened, has been the number one chefs’ canteen for years, and now, it looks like Richmond Restaurant is getting the love. When I visit, there are at least five chefs, including Stephen Gibson of Pichet and Graeme Dodrill of Peploe’s, tucking into the First Tuesday tasting menu.

I have a late booking, well late for a Tuesday, and as I arrive dutifully at 8.15pm, I’m shown upstairs. “Oh here we go, off to Siberia,” I think, as I glance into the bustling room downstairs and spot another restaurant critic. But in fact, I think I prefer it upstairs. It’s intimate and cosy, with just six tables.

While a tasting menu (€48) might seem like an odd thing to do on a Tuesday, it’s a clever idea. Part test-kitchen to try out new ideas and part look-at-me good value to encourage prople to eat out on one of the the quietest nights of the week, it had been running weekly pre-lockdown and is now running on a monthly basis. On the blackboard, three wines feature at reduced prices. The Geil Pinot Noir (€36 reduced from €41) gets our vote, being a compliant grape that works with a variety of dishes. The wine list itself is short but nicely formed, with good offerings by the glass.

There are five courses, but there’s nothing fussy about the way they’re delivered. Neat little slices of fennel bread have a cakey, nearly brioche texture, so of course the added boldness of whipped butter is completely appropriate. And then three snacks: a Galway Bay oyster, its saline, iodine meatiness given a kick with a Bloody Mary foam and an added touch of the sea with lumpfish roe on top; a gougère is filled with an intense cheese custard; and a posh chicken wing is stuffed with summer truffle, glazed and grilled till it’s dark brown and the ends of the bones are crispy enough to eat.  A good start.

The next course is an absolute stunner. A modestly named celeriac and mushroom pie shows serious skill and stays just the right side of cheffy fervour. The light flaky pastry encloses intensely savoury flavours – earthy celeriac and rich girolles, with a cep cream to dip it in and feathery bits of crispy kale to add texture and a ferrous note. This might be my dish of the year.

The fish course is impressive, not least for the number of ingredients that are expected to play nicely together. Sitting on top is a lobster raviolo, the pasta fine and silky, the lobster in defined little chunks rather than a mousse. A lobster bisque ties the layers together – a piece of cod, skin removed and the fish grilled perfectly, crunchy prawn tempura, a few mussels out of their shell, kernels of sweetcorn, peppers and capers and bright green flashes of dill oil. It is a balancing act that comes off admirably.

The meat course can often be the stumbling block on a tasting menu, but the pan-seared rump of lamb, shimmering pink and deep flavoured, leads the charge, along with a truffle glazed shoulder of lamb that has been slow cooked, the sweetness of the glaze lifting what could be heavy flavours. A sweetbread has perhaps had a little too long on the pan, so is firmer than I’d like, and finishing off this substantial dish are two hand-rolled gnocchi, and fresh peas tossed in mint pesto.

There is no thuggery with the chocolate fondant, in fact it is the most polite example I have ever encountered. About a third of the size of the usual monsters, its membrane is light and fragile, releasing a stream of warm velvety chocolate into the orange mousse and matcha tea ice-cream.

A word of caution. I am reviewing a menu that features once a month and is not repeated. So no, you won’t be eating the same dishes. While I can’t vouch for the standard daily menu, I can resolutely say that you will be in for a treat if you bag a table for the monthly First Tuesday tasting menu here. I just may have found my favourite low key restaurant in Dublin. Well, whatever about the other days, for Tuesdays definitely.

Dinner for two with one bottle of wine was €132.

Food provenance: Not listed but all Irish - meat from JJ Young, fish from Kish, Caterway fruit and veg

Mary Berry’s Ireland visit: here’s what she did and what she cooked
7