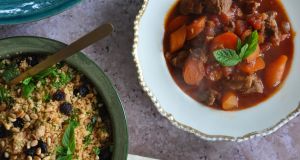 As the weather changes, so too does the way that we cook. I’m welcoming back warming spices and some of my favourite go-to stews as autumn commences. This style of cooking perfectly suits busy weeknights too, now that school has restarted.

Eunice Power catered for our wedding a few years ago. We had a Middle Eastern feast with family-style platters on each table. One of the main courses was chicken and date pastilla. It’s a recipe from Honey & Co in London that I now make each year for our anniversary dinner.

Dates and chicken thighs are simmered low and slow in the oven with onions and a mixture of spices. Then it’s all chopped up and mixed in the sweet, spicy gravy and topped with filo pastry. It’s so delicious.

I’ve echoed those flavours in this dish. The sweet sticky dates work so well with cinnamon and cumin. The touch of ginger brings warmth and a taste of the exotic that makes this no ordinary lamb stew.

If you have a North African tagine then now’s the time to dust it off. The earthenware tagine dishes with conical lids are designed so that the steam that rises from the dish into the lid, condenses and flows back down into the dish, preventing it from drying out.

It’s similar to a dutch oven or slow cooker. This cooks really well in a slow cooker too, so can be prepared in the morning for an easy midweek meal. If you are cooking this in a slow cooker or tagine you’ll need a little less liquid as none will evaporate, so reduce the stock to 400ml.

I love to serve this with couscous. I use a very quick and easy method to cook couscous by adding one cup of dried couscous to a lunchbox, followed by any spices or seasoning, a little butter or drizzle of olive oil, and then two cups of boiling water. Give it a good stir then place the lid on. After five minutes the grains will have absorbed the water and seasoning and be perfectly cooked. Stir through a handful of fresh herbs or add raisins, chopped apricots or toasted pine nuts.

This tagine freezes very well too, so I often double the amount, cook it in a slow cooker and freeze half for a rainy day.

1 Heat the olive oil in a wide-based pan, add the onion and saute for five minutes before adding the garlic and ginger. Stir well and heat for one minute more, before adding the lamb. Stir to coat everything well and leave to cook for a few minutes.

2 Add the carrots, dates, chopped tomatoes and stock. Increase the heat to bring almost to the boil, then lower the heat to a simmer and place the lid on. If you have a tagine then this can all be placed in the oven to cook. Alternatively, place in an oven-proof pot and cook in the oven. I usually leave it to simmer low on the hob for 30-40 minutes and I remove the lid for the final five minutes to reduce it down a little.

3 Taste for seasoning and stir through most of the herbs. Serve with rice or couscous and scatter with the remaining herbs.

How to manage your children’s screen time
5