At RCA, his label for three decades, Pride was second only to Elvis Presley in record sales 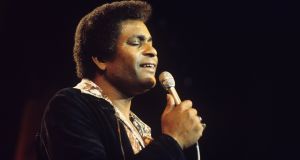 Charley Pride on stage in the 1970s. Photograph: David Redfern/Redferns

Charley Pride, the son of a Mississippi sharecropper who went on to become the first black superstar in country music, died on Saturday in hospice care in Dallas. He was 86.

His publicist, Jeremy Westby, said the cause was complications of Covid-19.

A bridge-builder who broke into country music amid the racial unrest of the 1960s, Pride was one of the most successful singers ever to work in that largely white genre, placing 52 records in the country Top 10 from 1966 to 1987.

Singles such as Kiss an Angel Good Mornin’ and Is Anybody Goin’ to San Antone? – among his 29 recordings to reach No 1 on the country chart – featured a mix of traditional instrumentation and more uptown arrangements.

At RCA, the label for which he recorded for three decades, Pride was second only to Elvis Presley in record sales. In the process he emerged as an inspiration to generations of performers, from black country hitmaker Darius Rucker, formerly of the rock band Hootie and the Blowfish, to white inheritors such as Alan Jackson, who included a version of Kiss an Angel on his 1999 album, Under the Influence.

The reasons for Pride’s appeal were undeniable: a resonant baritone voice, an innate ear for melody, an affable demeanour and camera-friendly good looks.

In interviews, however, he sometimes played down the role his blackness played in his career, especially when confronted with racial prejudice.

“People thought it was going to be hard, but it wasn’t,” Pride said, talking about what it was like as a black man to gain a foothold in country music in the 1960s, in a 1997 interview with Nashville Scene. “I never got any flak or anything. And that’s what’s been astonishing to most reporters, especially since I came along at the height of the sit-ins and bus boycotts.”

Pride’s 1994 autobiography paints a more fraught picture of his early years in the music business. “The racial element was always there,” he wrote (with Jim Henderson) in Pride: The Charley Pride Story.

RCA Records, for example, once mailed promotional copies of his earliest recordings to journalists and disc jockeys across the country without including the standard publicity photos, thus concealing his race. The label credited those first singles to “Country” Charley Pride, as if to underscore his affinity with rural white culture.

Once his racial identity became evident, Pride wrote, he often had trouble securing bookings and sometimes endured the indignity of having southern disc jockeys refer to him on the air as that “good nigra”. To ease tensions during his early concerts he made lighthearted references to his “permanent tan”.

Despite his efforts to accommodate his white audiences, Pride was not country music’s answer to Jackie Robinson, as some have observed. His generosity of spirit notwithstanding, his individual success never opened doors for black performers in country music the way Robinson’s did for other black players in Major League Baseball.

It was more than four decades, in fact, after Pride made his debut in country music that Rucker became the second African-American to have a No 1 country hit, with the single Don’t Think I Don’t Think About It.

Nevertheless, the dignity and grace with which Pride and his wife of 63 years, Rozene Pride, navigated their way through the white world of country music became a beacon to his fans and fellow performers.

“No person of colour had ever done what he has done,” Rucker said in Charley Pride: I’m Just Me, a 2019 American Masters documentary on PBS.

Pride himself was more self-effacing in assessing his impact but nevertheless expressed some satisfaction in having a role in furthering integration. “We’re not colour-blind yet,” he wrote in his autobiography, “but we’ve advanced a few paces along the path, and I like to think I’ve contributed something to that process.”

Charley Frank Pride was born on March 18th, 1934, on a 40-acre sharecropping farm in Sledge, Mississippi, the fourth of 11 children of Tessie (Stewart) Pride and Mack Pride snr. His father had meant to name him Charl but a clerical error on his birth certificate officially left him with the first name Charley.

Using his earnings from picking cotton, Charley bought his first guitar, a $10 Sears, Roebuck model, when he was 14. His father, a strict man, frowned on what he believed to be the unsavouriness of the blues then prevalent in Mississippi, preferring instead the music of the Grand Ole Opry and thus contributing to his son’s early devotion to Hank Williams and Roy Acuff.

Rather than choosing to become a singer, however, Pride initially decided to pursue a career in baseball in the Negro American League, leaving home at 16 to pitch for the Memphis Red Sox, among other organisations, and the Boise Yankees, an Idaho affiliate of the New York Yankees.

He married Ebby Rozene Cohran in 1956 and was drafted into the US army, interrupting his baseball career, which had already suffered a setback when he was injured while pitching for Boise.

After his discharge from the service two years later, Pride returned to baseball in the early 1960s, accepting invitations to try out with the California Angels and the New York Mets but was ultimately not offered a contract by either franchise.

The Prides by this time had relocated to Helena, Montana, where Pride played both semi-pro baseball and music at social events for the local smelting plant where he worked.

He and his wife started a family in Helena, where Pride came to the attention of country singers Red Sovine and Red Foley. They eventually persuaded him to make a go of it in country music.

The demo recordings Pride made on arriving in Nashville, Tennessee, in the early 1960s initially failed to attract interest. It was not until producer Jack “Cowboy” Clement supervised a session of his in the summer of 1965 that Chet Atkins finally took notice and offered Pride a record deal.

Just Between You and Me, the third single from Pride’s sessions with Clement, reached the country Top 10 in 1967, inaugurating a string of hits that extended into the late 1980s.

In 1971, the year that saw the release of Kiss an Angel Good Mornin’ – his eighth No 1 country single and sole Top 40 pop hit – Pride was named both male vocalist of the year and entertainer of the year by the County Music Association. He also won two Grammy Awards that year, in the sacred and gospel performance categories, for a single with Let Me Live on one side and Did You Think to Pray on the other.

In 1972 Pride was again named male vocalist of the year by the Country Music Association and won another Grammy, for best male country vocal performance, for the album Charley Pride Sings Heart Songs.

He became a member of the Grand Ole Opry in 1993. The only African-American to precede him on the show’s cast was harmonica player DeFord Bailey, a star on the Opry from 1927 to 1941. (In 2012 Rucker became just the third black performer ever to join the Opry.)

Pride was inducted into the Country Music Hall of Fame in 2000.

In 2008 he and his brother Mack jnr, along with 28 other surviving veterans of Negro league baseball, became honorary draftees of the 30 current teams in Major League Baseball, in recognition of their achievements and of the larger legacy of the Negro leagues. Pride was selected by the Texas Rangers, a franchise of which he was part owner and for whom he sang the national anthem before game five of the 2010 World Series. Mack died in 2018.

A former part owner of the team, former President George W Bush, said in a statement, referring to the former first lady Laura Bush: “Charley Pride was a fine gentleman with a great voice. Laura and I love his music and the spirit behind it.”

Besides being an entertainer, Pride was a successful businessman, investing in real estate around Dallas and establishing Chardon, an artist booking and management company that helped launch the careers of country singers such as Janie Fricke and Neal McCoy.

He was also a partner in Pi-Gem, a song publishing company owned with producer Tom Collins.

In addition to his wife, he is survived by his sons, Carlton and Dion, both of whom are musicians; a daughter, Angela Rozene Pride; two brothers, Stephen and Harmon; two sisters, Catherine Sanders and Maxine Pride; five grandchildren and two great-grandchildren. – The New York Times