The Time of My Life: A poet’s work provides uplift and inspiration to a composer 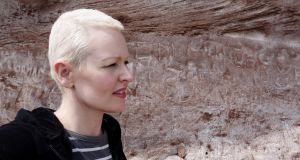 Ailís Ní Ríain: “He phoned again. I could barely form the words but I managed, and we discussed how I proposed using his work.”

I remember watching the poet Brendan Kennelly on the The Late Late Show when I was growing up in Cork. I was struck by him because he was a poet, looked a bit like my father (who died when I was young), had a smile you couldn’t deny and a habit with drink which he’d managed to overcome.

I’d repeatedly borrow his books from Cork City Library and, if a new one came out, I’d buy it if I had the money. His devastating use of language, the delightful idiosyncrasies and poetic portraits of our capacity for betrayal, self-aggrandisement and self-loathing.

Later, I found myself in York, northern England, having recently completed my masters in music. Kennelly had just published The Man Made of Rain and, for my birthday, my mother posted me a copy. At the time I was struggling in the heart and head. I had no concentration and focus on anything. I managed to read this not just once but several times.

His words resonated so strongly that I decided I wanted to use them in my music if he would give me his permission. I wrote to him, care of Trinity College, where he taught at the time, to request permission and assumed I wouldn’t hear back.

In the meantime, I had moved to Manchester and started another nine-to-five job. I came back from lunch one afternoon: “Someone called Brendan phoned while you were out.”

He’d called and I’d missed him. I couldn’t believe it.

“He said he’ll phone back.”

But my head told me I’d missed my chance. “Brendan Kennelly has much better things to be doing then phoning me,” I repeatedly told myself. Furthermore, I was ashamed that I hadn’t answered the phone myself and that he’d definitely not call me back when he realised I was only working in an office doing something totally removed from music.

But I was wrong. He phoned again. At first, I could barely form the words but I managed, and we discussed how I proposed using his work. He thanked me and told me to make sure to look him up I was next in Dublin and I promised I would.

A few months later I met him in Dublin, “between the two lads out the front” (how he described the statues of Edmund Burke and Oliver Goldsmith standing at the front of Trinity College). It is an encounter I will never forget. He was generous with his time and his thoughts and although many things weren’t going my way at the time, he took me seriously and trusted me with his work which was, for me, an unbelievable honour.

I composed The Man Made of Rain incorporating his poetry. It was premiered at the National Concert Hall and Brendan came to hear it. A few years later, my brother died, while I was recovering from a breakdown. Brendan phoned me and in his lovely sweet voice, shared some wisdom I could tell was hard won. Not once, but twice, his words raised my spirits, increased my confidence and helped me back on my feet.

Ailis Ní Riain is a composer and writer. Her new work, I Used to Feel, takes place at the Marker Hotel in Dublin September 21st-23rd, as part of the Dublin Fringe Festival

An Irish solution to the coronavirus problem
6

Drivers, slow down for the good of the planet (and your wallet)
10

Generation panic: why is there so much anxiety among millennials?
Real news has value SUBSCRIBE