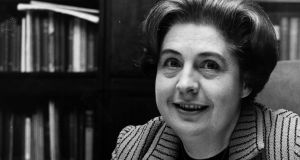 As for so many women of her generation, it was the outbreak of the second World War that changed Betty Lockwood’s life.

The first chair of Britain’s Equal Opportunities Commission, she was able to escape the traditions of her family background by securing a telephonist’s job at the local authority’s electricity department when the men had left to join the services. It opened for her a route to education, a subsequent professional career and a lifetime dedicated to helping other women achieve fulfilling lives.

She never spoke of her disability in later life, but such a challenging childhood trauma must have contributed to her characteristic fortitude

Lady Lockwood, as she became, could never even have dreamed of the opportunities provided by night school and Ruskin College, Oxford, when she first started work aged 15, selling hats in a small dress shop in the mill town of Dewsbury, West Yorkshire.

Betty’s father, Arthur Lockwood, ran a fish and chip shop and her mother, Edith, was a weaver in the wool industry. Family life had already been disrupted when Arthur lost his job as a miner because of his trade union activities during the 1926 General Strike, and then by an accident which Betty suffered as a four-year-old child.

She had trapped her foot while playing in a brickyard with her elder brother and sister, and the injury she suffered later led to gangrene. She lost more than a year at school because of an erroneous official decision that her infection might be contagious.

That was subsequently discounted but her injury persisted and doctors recommended amputation when she was 12. Her father asserted that Betty herself should take that decision when she was old enough to do so and, after many years of pain, she had the long-postponed operation aged 18. She never spoke of her disability in later life, but such a challenging childhood trauma must have contributed to her characteristic fortitude.

She needed just such a considerable strength of purpose in the first years after the establishment of Britain’s Equal Opportunities Commission (EOC) in 1975. The EOC was set up by Roy Jenkins, then the home secretary in the Labour government elected the previous year, and he asked Lockwood, the chief woman officer of the Labour party, to take the chair with the Conservative Elspeth Howe as her deputy.

The new body faced immediate problems for a multitude of predictable reasons. It was started with a skeleton staff against a backcloth of public scepticism and it had an existing backlog of 10,000 complaints.

Its initial creation was mercilessly mocked by the press – it was suggested that the Manchester offices should be more appropriately located in “Personchester” – and this turned to hostility as the EOC at first struggled to define its role. However, largely thanks to Lockwood’s perseverance and insistence on a bipartisan approach, the EOC survived the change of government only four years later.

By then she had overseen a system of formal investigations, set up a procedure for test cases, secured a team of officials and dealt with the original backlog. In addition, Lockwood and her staff had embarked on consultations with industry, unions and the professions in an attempt to change attitudes, promote good practice and enforce the recently enacted equality legislation – the Equal Pay Act (1970) and Sex Discrimination Act (1975).

Forty years later, Lockwood expressed her disappointment that women had not achieved as much as she had hoped and expected. She said, in an interview in 2014, that she had thought at the time that it would take 25 years before women would secure equality at work, but that women still faced a struggle to compete in the labour market while simultaneously raising a family. While men and women had equal opportunities, in her view there was still a glass ceiling – albeit what she termed a ceiling with glass windows.

Born at Shaw Cross, Dewsbury, Betty joined the Labour party aged 18 and became active in local politics. While working for the council, she won a scholarship to Ruskin and studied economics, political theory and history for a year. She then accepted a part-time job with the Labour party in her home town and combined it with a second year’s study at Ruskin by correspondence.

For the next 30 years, Lockwood was a full-time member of the Labour party staff. She joined the regional staff at Reading in 1948 and two years later she became the regional woman’s officer in Yorkshire and spent 15 years in that post in Leeds before her appointment as the party’s top woman official in Transport House in 1967.

During this time Lockwood was also the secretary of the National Joint Committee of Working Women’s Organisations. She became aware of the need for a statutory body to implement the Equal Pay Act, and it was thus as a result of pressure exerted from within the Labour party that plans to establish the EOC were originally formulated.

She also embarked on a policy to increase the number of female Labour MPs, which had declined steadily since 1945, and which she recognised would need a quota system to correct. It was not until the 1987 election that Labour matched the 1945 figure of 21 women elected. In 1978 she was made a member of the House of Lords.

She became an active member of the Lords when she left the EOC in 1983. She was a deputy speaker from 1989 to 2007, and took a frequent part in debates about equality.

Every week I would run 40km, and every week it would take longer – I needed a plan

‘So if you go out and both get drunk you can’t have sex? That’s f**ked up’