Ping pong, baking, doing the splits: Who knew hobbies could be so much fun? 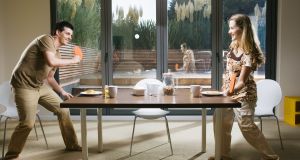 Just over a month ago, I consideredping pong to be a silly game for engineers on six-figure salaries in Silicon Valley. Now I catch myself hoping to make next year’s Olympics. Stock photograph: Getty Images

A few weeks ago, just as lockdown began, my boyfriend arrived into the kitchen with a ping pong set tucked under his arm. Purchased in TK Maxx for the princely sum of €12.99, the set contained two paddles and an assortment of ping pong balls. I had never played ping pong before. In fact, I had been dismissive when he first bought the set. “As if we’ll ever have any use for that,” I sneered. What I did not foresee was that a global pandemic would soon leave us confined to our apartment and that this frivolous acquisition would prove not only useful, but vital.

And so, on a weekday afternoon, I decided to humour my boyfriend and play a game of ping pong. After all, it wasn’t as though I had a packed agenda. We converted our kitchen table into a ping pong table and fashioned a net from an old shoelace tied to two chairs. Not the most sophisticated set-up, but it did the job.

At first, we just gently hit the ball back and forth to one another. Our primary objective was not to break anything.

Once we established a rhythm, we started playing for real. First to 11. Best of five. On that first day, I received a drubbing. I struggled to keep the ball in play and made an utter hames of my serve on several occasions. But strangely, I didn’t mind. Despite losing, I found the game to be meditative, relaxing and fun. At the very least, it was a better use of my time than being on my phone and I vowed to play again.

All of this is to say that I have really gotten into ping pong. Just over a month ago, I considered it to be nothing more than a silly game for engineers on six-figure salaries in Silicon Valley. Now I catch myself saying things like, “I’m glad that the Olympic Games are postponed because that gives me time to try to qualify for next year.”

On one occasion, I even channelled my inner Pat Spillane and accused my boyfriend of playing “puke ping pong”. I am passionate about ping pong, you see, and I hate to see it played cynically.

The whole thing has got me thinking about how I use my free time. Namely I have been thinking about my chronic lack of hobbies and pastimes. Ordinarily, I spend much of my free time doing things like watching Netflix, listening to podcasts, reading and generally faffing about on the internet. Do these count as hobbies? I am not convinced.

There are some wonderfully well-rounded people out there who spend their free time singing in choirs and baking bread and playing tag rugby and learning languages. They say things like, “Thursdays are out for me because I have hockey training.” I am not and have never been one of those people, but my sudden fondness for ping pong has made me wonder if perhaps I could be.

I feel like my generation lost hobbies ... Sometimes it’s
just fun to do something because it brings you joy, peace, relaxation, or allows you to be creative

Much has been written over the past few years about how people my age have all but abandoned hobbies. The reasons for this are manifold. For one thing, lots of hobbies require an investment of time and money that many of us simply do not have at our disposal. Similarly, many of us have been conditioned to view everything as a potential side-earner and see little value in doing something if the only return on investment is feeling good.

A viral tweet posted in January summed it up succinctly.“I feel like my generation lost hobbies,” it read. “Everything doesn’t have to be a hustle, side hustle, or money-making enterprise. Sometimes it’s just fun to do something because it brings you joy, peace, relaxation, or allows you to be creative.”

If there is one thing this period of enforced isolation has given us, it is the freedom to try new things and cultivate new skills. Aside from playing ping pong, I have baked a lemon drizzle cake and set about learning how to do the splits with the assistance of an app.

And I’m not the only one. Up and down the country, people are knitting scarves, baking loaves of sourdough or learning a cúpla focal of a new language. They are rediscovering the joy of doing something just for the fun of it and reaping the benefits. Indeed, studies have shown that those who engage in enjoyable leisure activities enjoy greater physical and psychological health. Something tells me that mindlessly scrolling through Instagram and watching Tiger King doesn’t have quite the same effect.

Will I emerge from this with a new lease on life and a rake of soul-nourishing hobbies? Or will I immediately revert back to my old ways? That I cannot say.

For now, I will keep playing ping pong in my kitchen. And who knows? If I stick with it, perhaps I’ll have my own Eddie The Eagle-style fairytale in Tokyo next summer.

Journalist Amy O’Connor is a guest columnist this week