Apparently I’m going to hell for baptising my daughter. That’s a bit harsh

Conor Pope: I’ve broken most of the commandments at one stage but didn’t think I would be damned for this 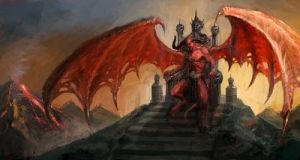 “Details of hell enclosed, well worth reading! Understand many go there and there is much crying and wailing! So terrible.” Illustration: iStockPhoto

I’m going to hell. That is according to an anonymous soul who sent me an impressively comprehensive guide to my eternal damnation last week.

The harsh – I think – judgment came in three parts with the sender spending a not-too-shabby €1.55 on stamps to be sure it got to me in a timely fashion. The hand-written portion started with traditional black ink and the words “Scripture says”. Then the author switched to a less conventional red marker and wrote – in capital letters – “DO NOT BE DECIEVED GOD IS NOT MOCKED”.

After that they went back to black and urged me to “read everything attached”. The hand-written portion concluded by saying: “Details of hell enclosed, well worth reading! Understand many go there and there is much crying and wailing! So terrible.”

I liked the jaunty use of exclamation marks and the ellipsis meant I couldn’t help but read it in the voice of Donald Trump. That may or may not please the sender. I will never know because they didn’t bother with a name or return address.

Am sure it was just an oversight. So unfortunate.

Anyways, I did what my correspondent advised and read my guide to hell closely. It included a couple of photocopied pages from an unidentified source which I traced, with the help of Google, to a website in Northern Ireland – the actual address is irrelevant.

Helpfully the anonymous author had underlined – again with heavy red marker – key sentences. “I was led by an Angel to the chasms of hell,” was one such line. “Most of the souls there are those who disbelieved that there is a hell. How terribly souls suffer there,” read another. “I have told you children it is the sins of abortion and homosexuality that call the sword of justice down about the earth,” read a third heavily underlined quote.

There was also a photocopied article under the arresting headline “The Woman Who Died . . . and came back from hell”. Again my mystery correspondent underlined key bits in red ink – “She tried vainly to get back into her body and then to escape” – and highlighted other bits using a yellow highlighter pen.

The article told the story of “a lady dentist” who “died” after being struck by lightning. Her death is described as a “life changing event”, well it would be wouldn’t it. The good news is the “lady dentist” made it back from hell and has spent the years since then warning of the terrors she saw.

I read everything with interest and – to be honest – confusion. I’ve no real issue with people of any faith as long as they don’t seek to impose their views on those who don’t choose to share them and I was at a loss as to why I had been selected for damnation. Could they not find an address for Róisín Ingle, Fintan O’Toole or Patsy McGarry?

The key to the puzzle was staring me in the face. The envelope was addressed to “Mr Conor Pope, c/o Alive”. It included a request that the publishers of the freesheet which is delivered to some homes in Ireland and deposited in some Catholic churches redirect it straight to me.

It dawned on me that I was being warned about my fiery eternity because I baptised my daughter earlier this year. Now this was an act so abhorrent to an anonymous author at Alive – What’s with this reluctance to put a name to a view lads? – that they put me on the cover of a recent edition of their “news” paper under the compelling, if entirely false, headline: “Conor Pope mock’s his own child’s baptism”. The front page blurb directed readers to a piece inside which called me “smart”. It said some other stuff too but I like to dwell on positives.

Affairs of the afterlife

So the reason I attracted these dire warnings from my anonymous correspondent was – weirdly, I think – for the sin of baptising my child. Now it’s been a long time since I read the 10 commandments so to be sure I checked and sure enough there was no sign of “Thou shalt not baptise your child” anywhere.

For the sake of full disclosure, I’ve broken most – but thankfully not all – the commandments at some point

In any event I’m certain, or at least as certain as I can be when it comes to affairs of the afterlife, that that indiscretion – if you view it as such – will be a long, long way down the list of reasons I’ll get the thumbs down at the pearly gates, if there are pearly gates.

For the sake of full disclosure, I’ve broken most – but thankfully not all – the commandments at some point. Some I still break regularly. I’ve a terrible habit, for instance, of coveting my neighbour’s goods although he doesn’t do himself any favours with his serious online shopping habit and his perpetual absence from home which forces me to endlessly take delivery of his fancy looking electronics.

I also take the Lord’s name in vain religiously and sometimes I shop in Lidl on Sundays. I work in The Irish Times (which is bad enough in and of itself) and recently stole some pens from the office stationery cupboard without any intention of using them for work-related purposes.

I await my next letter of judgement with anticipation.