Laura Kennedy: Lessons my snippy friend has taught me

‘Resentment of friends can slip into your mental landscape surprisingly easily’ 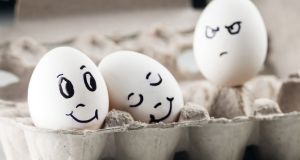 “My friend has become increasingly, for want of a better word, snippy. Not just with me, but with everyone, as far as I can tell.”

Over the last year or so, I have observed a change in one of my friends. Acquaintances know her to be an extremely stylish dresser; a feature which I can confess to having felt a touch envious of in the past. She will usually float in like an elegant tropical bird, while in my battered converse and old jumpers, I feel more like a goose, or some other waddle-prone, disagreeable and disproportionate looking bird.

A touch of envy often underlies friendships. It probably should. If you can see the good in someone to the extent that you want to pursue any sort of relationship with them, then you value the traits they possess. In romantic relationships in particular, we will frequently choose people with traits that we admire but don’t possess ourselves. We can envy even those we love. It does not become a problem provided we recognise the envy to be about our own desires and inadequacies. Only once it grows into resentment is there a practical problem for the relationship.

My friend has become increasingly, for want of a better word, snippy. Not just with me, but with everyone, as far as I can tell. Several mutual friends have wondered whether she is alright, or if they have upset her in some way. The snippiness expresses itself as a sort of unfriendly absence of joy in someone else’s achievement, or the odd disparaging comment seemingly out of the blue.

Recently, when a mutual acquaintance told my friend and I about someone we both know and like sadly getting a divorce, my snippy friend looked positively smug. The woman whose marriage is coming to an end had what most people would think of as an ideal marriage – financial comfort, a good job and a baby with almost unbelievably squeezable cheeks. I thought of that baby and felt terribly sad. My friend said, almost merrily “She’ll be less full of herself now anyway!”, before bouncing off to the bathroom. My companion and I stared after her, mouths slightly agape, then looked at one another, unsure of what to say. It is difficult to attribute such meanness to anything other than resentment.

Resentment can slip into your mental landscape surprisingly easily. All you need to do in order to foster it is to notice the tremendous arbitrariness and unfairness involved in the exercise of being alive, and draw bad conclusions from it.

In the current financial climate in Dublin, I struggle to meet a rent which is double the monthly mortgage payments of my friends who have been able to buy homes. Under these circumstances, it can sometimes be challenging to feel unabashedly happy for those around me when it appears that things come more easily to them.

I grew up without any money, but have friends from all sorts of backgrounds now – people who have family money with which to buy houses outright, friends who immediately on graduating university earn about four times what I do. People with wealthy partners who can settle down and have families when I am nowhere near being able to do such a thing.

However, feeling snippy about any of these would be incredibly selfish, and a grave mistake, largely because all of those scenarios have nothing whatever to do with me. People with family money are no more inherently guilty of something than people without it. People who chose a more lucrative path made a good financial decision. To be resentful would be to make other people’s life choices and situations about me when they blatantly are not.

We can all learn from a snippy friend. Apart from determining to spend less time with them (which is advisable), they are an important lesson against indulging our baser and more selfish inclinations, of feeding envy so that it grows into narcissistic resentment. Sometimes, being happy for those we care about is a decision rather than an instinct, but it is always a good one.

Just four countries remain on green list: Where do we stand with travel now?
2

Nuala O’Faolain, a feminist whose happiness was often tethered to men
Real news has value SUBSCRIBE