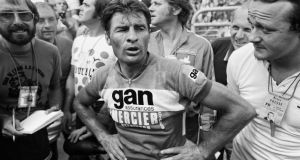 An exhausted Raymond Poulidor after coming third at the 20th stage of the Tour de France in 1976. Photograph: AFP/Getty

Raymond Poulidor, who has died aged 83, became France’s most popular cycle racer – and arguably its most best-loved sportsman – through his valiant, near-perennial failure to win the country’s national Tour over 15 years between 1962 and 1976, and in spite of the fact that he never wore the race leader’s yellow jersey.

As late as summer 2019, he was still travelling on the tour, more warmly applauded than any of the current stars, and for the French at least, Poulidor became synonymous even outside cycling with any brave yet unrewarded effort to reach the highest honour.

“There is a Poulidor of everything, as soon as anyone comes second in anything,” he joked. For example, the former French prime minister Michel Rocard, who never made it to president, was eventually termed the “Poulidor of politics”. But Poulidor was capable of achieving major victories, such as the Tour of Spain in 1964, and he notched up a total of 189 race wins.

Poulidor built his cycling career – and his subsequent post-racing life – on a single antithesis. He was everything that the five-times Tour de France winner Jacques Anquetil, his sworn rival through the 1960s, was not. Where Anquetil set his tour record in a clinical style that appealed to the urban side of France, “Poupou” presented a far more cuddly image, winning the love of the rural public in the sport’s heartlands.

He was born at Masbaraud-Mérignat in the Creuse département, where his parents, Martial and Maria (nee Montlaron), were tenant farmers, paying half their produce in rent to a landlord. After being given copies of the sports magazine Miroir-Sprint by a school teacher, he took up racing at 16 along with two of his three brothers, initially concealing his new passion from his mother, who was fearful of the dangers.

Poulidor turned professional in 1960 with the team sponsored by the Mercier cycle company; he would remain with the squad in its various incarnations until his retirement in 1977. In 1961 he took the French national championship and the Milan-San Remo; a year later he finished third to Anquetil in the Tour de France. The rivalry reached its climax in the 1964 Tour, where the pair’s elbow-to-elbow duel on the extinct volcano of the Pûy de Dôme created a single iconic image that sums up cycling’s golden age.

Poulidor aficionados assert that he could have won three tours had it not been for a combination of circumstance, poor decision-making and bad luck. In the 1964 race he came second by only 55 seconds in Paris, but lost time because he mistimed the stage finish at Monaco, suffered a puncture and crash on the way to Toulouse, and chose the wrong gear in that stage finish on the Pûy de Dôme. In 1965 he fell victim to an alliance of rival cyclists that worked in favour of the Italian Felice Gimondi, while in 1968 – when Anquetil was in semiretirement – he was hit by a motorbike and forced out of the race.

However, after 1964 his popularity (or as some put it, Poupoularité) was greater than that of “master Jacques”, and so was the appearance money he received at local races. He and his team manager, Antonin Magne, cultivated the image of bumbling peasants, yet that is belied by stories of Poulidor at preseason training camps, where he would win enough money playing poker with his team-mates to pay for a stay of several weeks on the French Riviera.

Having been stymied by Anquetil, in the latter stages of his career Poulidor fell on Eddy Merckx, the insatiable “Cannibal”; even so, in 1974, at the age of 38, he managed to rattle Merckx in the Pyrenees, winning the stage at Pla d’Adet and eventually finishing second. Two years later, with Merckx heading for retirement, he finished third in the tour at the age of 40 before hanging up his wheels the following year.

His record of eight podium finishes in the tour stands to this day, although he never wore the race leader’s yellow jersey. In 1964 he got within 15 seconds of taking the lead at the Pûy de Dôme, while in 1973 he fell four-fifths of a second short in the time trial prologue.

His first, bestselling autobiography, published in 1968, was entitled La Gloire Sans Maillot Jaune (Glory Without the Yellow Jersey). After retirement, Poulidor continued to appear at the tour, latterly working for the bank Crédit Lyonnais, the yellow jersey sponsors. In 1987 he visited Anquetil on his deathbed, when the Norman told his old rival he was about to finish second yet again.

In 1961, he married Gisèle Bardet, a postal worker from St Léonard de Noblat, where the couple made their home. She survives him along with their two daughters, Isabelle and Corinne. His two grandsons, David and Mathieu Van der Poel, are both professional cyclists. – Guardian Service