A long, long romance: ‘I suppose I am glad he asked me to dance that night’

Ned and Eileen Cusack, one of Ireland’s oldest married couples, mark their 73rd Valentine’s Day together 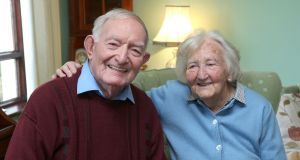 Ned and Eileen Cusack at their home near Moycullen in Co Galway: ‘We never had too much, but we always had enough.’ Photograph: Joe O’Shaughnessy

Ned and Eileen Cusack have no intention of buying expensive flowers or dining in a fancy restaurant but they could still teach the nation a thing or two about love and romance as they mark their 73rd Valentine’s Day as a married couple.

Had it not been for Hitler’s invasion of Poland in the autumn of 1939, one of Ireland’s oldest married couples, would most likely have never met.

Ned – who will turn 99 in March – joined the Defence Forces in 1939 and within weeks the Emergency (the Irish government’s response to war breaking out) had been declared and he was fast-tracked into the officer classes.

“I was the cadet in the Curragh but when the war broke out we were all commissioned quickly and I ended up in the barracks in Galway.” The proud Cork man pauses for a beat before adding “against my best wishes” with a laugh.

There was only one place for young men and young women looking for a dance and maybe a bit of romance in Galway in the early 1940s and that was the Pavilion Ballroom in Salthill, a place universally referred to as the Hangar.

It was in the Hangar that Ned met Eileen, a “pure-bred Galwegian” two years his junior. She was living in the house in which she was born, next door to the Skeffington Arms Hotel in Eyre Square.

“I am the woman who puts up with this clown,” she says with a laugh as she takes over the story briefly. “I suppose I am glad he asked me to dance that night,” she says. “Mind you back then you’d be glad if anyone asked you to dance.”

She recalls waltzing with the dapper soldier but can’t recall exactly what music was playing. “It was a completely different world back then and if you even went into a house of a fella you were doing a line with you would’ve been denounced from the pulpit.” 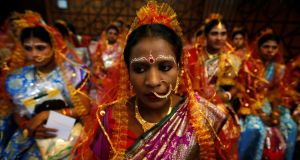 Their courtship was not without its bumps, most notably on the when Ned give Eileen a crossbar over potholed roads to far out Ballybritt for a day at the races. He was also suspended from the GAA for a spell after attending a hockey match she was playing in.

They got married on a warm June day in 1944 in St Patrick’s Church on Foster St before having a small wedding breakfast in the Skeffington Arms.

He wore his uniform and she wore a coral frock bought in Moons.

“You would never have had a big party back then, it was the Emergency after all and if there were 20 people at a wedding it was considered big,” says Ned.

When their wedding breakfast ended, they took a train to Wicklow for their honeymoon – a trip that was shrouded in doubt as the Defence Forces had been placed on high alert in the wake of the Normandy beach landings, so Ned’s clearance to travel only came late in the day.

After a week in the exotic east they moved into lodgings in Salthill not far from the dancehall where they first met. The first of their seven children was born there. “We have five girls and two boys,” Ned says. “So the men are badly outnumbered.

When Eileen is asked for the secret of a long and happy marriage she says, simply: “We never had too much, but we always had enough. I don’t think we expected too much. It was a very different time”.

Ned takes longer with his answer.

“It is a big question,” he admits. “There are a lot of couples with problems today and if anyone asked me how we manage it, all I can say is if you haven’t got love, you haven’t really got anything. That is the most important thing.

“I think your disposition has a lot to do with it as well. And it is always important to have enough. We were never wealthy but we just cut our cloth to fit in our measure.”

As for Valentine’s Day, Ned says it has never really mattered to the couple.

“It wasn’t something that we would be going into rhapsodies over. We took life as it came and Valentine’s Day was of very little consequence. You would hear about it but you’d never read about it in the paper or anything like that.

“But that is not to say we’re not romantic. Romance is a different thing, romance is everything and you have to keep it alive.”