Forty years later than originally intended, an exhibition by Dale Chihuly, one of the world’s leading glass artists, has reunited a group of friends and collaborators 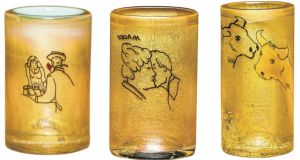 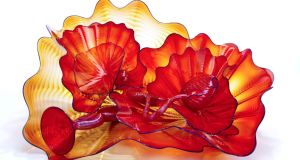 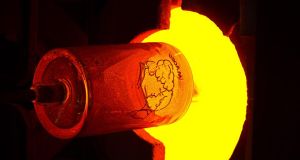 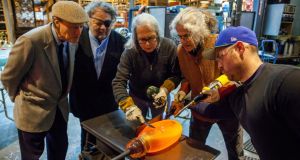 ‘It’s an amazing opportunity to work in my favourite country with some of my dearest friends’: Dale Chihuly (second left) with Seaver Leslie, Flora Mace, Joey Kirkpatrick and Jason Christian working on a piece of glass

Maverick, genius, romantic, groundbreaking, inspiring . . . Dale Chihuly has more in common with James Joyce than you might think. So as Bloomsday is celebrated on Monday, it’s only fitting that one of the world’s leading glass artist is in Dublin to install The Ulysses Cylinders, a project that has been 40 years in the making, and which opens at both Dublin Castle and the Solomon Gallery later in the week. And even if Chihuly didn’t exactly say “We’re getting the band back together …” there’s something of the film script to the way the story has unfolded.

It starts back in the 1970s, as Chihuly and his close friends and collaborators, Seaver Leslie and Flora Mace, were in the US, working on the Irish Cylinders, a series of glass beakers with images of the Irish landscape and mythological symbolism drawn into them using a revolutionary and incredibly skilled new technique. Then, en route to Ireland in 1976, to exhibit the as yet unfinished series, there was a terrible car accident. Chihuly was so badly injured he lost sight in one eye, a disaster for anyone, but doubly so for an artist who relies on nuances of perception and depth of field.

After a period recovering in England, at the home of Peter Blake, the Pop artist famous for the cover of The Beatles’ Sgt. Pepper’s Lonely Hearts Club Band, Chihuly returned to the US, now wearing his trademark eye patch, and the cylinders were never shown in this country. But he couldn’t forget about the project, nor could he give up the idea of working with his close friends, Seaver Leslie and Flora Mace, one more time, and so, last year the Ulysses Cylinders were born.

“It was through Seaver’s passion that I became engaged with Joyce,” says Chihuly. “The beauty [of the book] is its multi-layered complexity, but let’s face it, it can be daunting to read.”

Scandinavian on his mother’s side, and Eastern European on his father’s, the artist was born in Tacoma, Washington, in 1941. He studied architecture, but was drawn to travel, going to Italy and the Middle East, then to the former USSR and Japan, working with glass in different forms en route.

Sometimes, in our age of technology and mechanical production, when looking at particular forms of craft as a layperson, you can wonder what all the fuss is about. The intricacies of a piece of handmade lace, or the glaze on a salt fired pot can induce a “yes, but …” response in someone who doesn’t know how difficult such a thing is to achieve. Not so with the glass sculptures for which Chihuly is best known, such as the phenomenal fall of his blue and gold chandelier in the foyer of the V&A in London, or the Turquoise Frost Chandelier installed at Lismore Castle, Co Waterford in 1995. These pieces wear their gloriously dramatic hearts on their sleeves.

The Ulysses Cylinders are a model of restraint in comparison. Delicate drawings are layered into the glass, and the way in which the glass is then blown to create the finished object, glowing in greens and golds, without losing the shape of the image, is an astonishing achievement. There are lines of text, musical notes, the Martello tower, racing horses, Homeric boats, Leopold and Molly Bloom, all drawn, first on paper and canvas by Leslie, then in glass by Mace, and finally “picked up” on a piece of molten glass, to be turned into the cylinder, which Chihuly describes as “a three dimensional canvas,” adding “I wanted to reference and honour the rich archaeological tradition of Ireland and wrapped the Cylinders in gold.”

There’s something undaunted about Chihuly, that fits perfectly with the idea of a film script of his life. He earned the money to go to art school by working as a commercial fisherman in Alaska, and it’s easy to picture him there, with his wild mop of curly hair and brave, adventurous enthusiasm. A restless quest to break boundaries took him to Czechoslovakia, home of master glassmaking, and to Murano in Venice. He also came to Ireland. “I first started going to Ireland in the 1960s,” he remembers. “I fell in love with the people and the landscape. I say that Venice is my favourite city, but Ireland is my favourite country.”

You may be forgiven for thinking Chihuly is just another of those world weary travellers who cite a love of Ireland to ingratiate themselves with the locals, but that would be both unfair and untrue.

Irish glass artist Róisín de Buitléar, who has been working with the team to make the Dublin exhibitions a reality, first met him in 1995, when he came to Waterford to develop Chihuly Over Venice, the project that would see him hanging his crazily, extravagantly contemporary chandeliers over the Venetian canals. “That was a high point,” says Chihuly, when I ask him if there’s any particular work that makes him say to himself, “Wow – I did that …”

“It was ambitious, to say the least. Working in factories in Finland, Ireland, Italy and Mexico, I got to work with specific specialities of each factory, whether it was unusual colours, glass cutting, sculpting or mirroring techniques.”

“He worked with local blowers, to challenge what glassblowing can be,” remembers de Buitléar. “Two of my students, Noelle Higgins and Paula Stokes, went with him. Paula still works with him.” The Waterford Sconce, inspired by that Irish trip, will be on show in the Solomon Gallery exhibition. “Dale challenges people,” she adds, “but they rise to that. It’s inspiring to work with him, because he enables people.”

Seaver Leslie bears this out. Leslie first met Chihuly out cycling. “I passed a barn, and there were flames. He was working with his furnace, an anomaly out there, like James Joyce. He’s a character, he has this cherubic air, but he has a really compelling personality. And he enjoys a good story, which is my line, I’m a narrative painter.”

Returning to the project after almost 40 years has, says Leslie, been really important. “We’ve talked about this for years. We’re good friends who live on the opposite sides of the country, and we had to finish our story,” he says.

Flora Mace completes the picture, rejoining the project, now with collaborator Joey Kirkpatrick. “Seaver probably hadn’t been around a hotshop in 40 years, and, well, we’ve all aged a bit, but we’ve all picked it up just where we left off.” Perhaps there have been a few refinements since the team first worked together, in the heady 1970s, when, after a long day working at a hot kiln, chickens would be roasted on top and ideas discussed into the night.

“Dale had an incredible magical character,” Mace remembers. “He was also so enamoured with Ireland, he’s an advocate for your country, he would come back [from trips] waxing poetically about the people, the landscape, the culture, the food …”

In the story of a group of creative friends, now in their seventies, coming together one more time, the original Waterford Crystal also needs to be recognised. Something to be proud of, a world-class centre, that drew the world’s leading glass artist to this country. “The talent is still here,” says de Buitléar, “and the skills. We’re just not recognising it, people aren’t looking at where the success really is.”

The team will begin installing the Ulysses Cylinders at Dublin Castle, and some of Chihuly’s more extravagant, signature work at the Solomon Gallery, appropriately enough in the run up to Bloomsday on June 16th. Equally appropriately, 2014 also marks the 100th anniversary of Joyce beginning work on Ulysses. With glass pieces in the collections of many of the world’s major museums, from The Yokohama Museum of Art to the Israel Museum in Jerusalem, the Met in New York to the Louvre in Paris, Chihuly has very little to prove. “I asked him,” says de Buitléar, “what was the most important thing about this project, and he said it was ‘working with old friends again, working with people I love’.”

“This is a project that has no commercial value. Dale is tying things up, putting them in order. It’s really about the friendship for him, about getting everyone together, about making the statement that these people were really significant in his life.” Chihuly agrees. “It’s a celebration. It’s an amazing opportunity to work in my favourite country with some of my dearest friends.” The band are back together, and they’ve been making some beautiful music.