‘Parent’: from noun, to verb, to competition

Having children, successive studies have found, doesn’t make you any happier – and can actually make you less happy 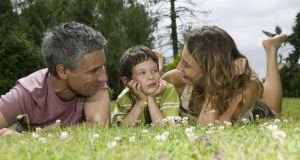 Children can make parents unhappy at certain times in their lives.

Are you helicopter, snow-plough, free-range, attachment or cotton wool? Do you prefer the laid-back Swedish approach, the tightly controlled French or the seat-of-your-pants Mediterranean?

Ten years ago, if someone had asked you these questions, you might have guessed they were referring to an extreme sport – and in a sense, you’d have been right. I’m talking about parenting.

There’s that word again. At some point in the recent past, “parent” stopped being a noun – something that you just bumbled along haphazardly being, without giving it too much thought – and evolved into a verb: something you did, a measure by which you could judge and be judged. Then it became a competitive sport.

Now you’re not considered to be parenting properly unless little Imogen is swimming under water by the age of two, knows how to count to 10 in three languages, and is captain of her preschool debating team.

And just when you’re feeling nicely smug about having done all right by little Imogen, someone will pop along to accuse you of laying the seeds for her future mental-health problems with your over-involved “helicopter parenting”.

How did raising children, something people have been getting on with quietly for about 200,000 years, come to be subject to such competitive pressure and such fraught self-examination? And can all this anxiety about their upbringing possibly be good for children?

There’s a growing body of research that suggests “overly enmeshed” parents raise children with lower self-esteem and maturity levels, higher anxiety and a lack of resilience. But I suspect the kids are all right. Throughout history, children have survived far worse than having parents who are too interested in their welfare. It’s the parents I’m worried about.

Unhappy parents
The Growing Up in Ireland report, which began in 2006 and has studied 11,000 children from the age of nine months, this week warned of the effects on children of parents who suffer from stress and depression. It found that stressed parents produced difficult children (though it didn’t determine which came first, the stressed parents or the difficult child).

It comes on top of other, consistent findings that parents, across the board, are not a happy bunch. Having children, successive studies have found, doesn’t make you any happier – and during certain periods of their lives (under the age of six, and from 12 to 15) kids actually make you less happy.

These findings upend everything we thought we knew about the relationship between well-being and having a sense of purpose, or being part of something bigger than yourself.

Postnatal depressions
None of these reports is talking specifically about postnatal depression, which is a serious issue affecting a minority of women, and is generally associated with the first year after the birth of a baby. Instead, they have uncovered a much wider and more worrying trend, one that afflicts both men and women.

The news that raising kids is a drudge is hardly headline-grabbing. The day-to-day workload – laundry, homework, bickering, sickness, sleepless nights, endless cajoling of them to eat – has never been parenthood’s top selling point. But none of this seemed to get our parents down to quite the extent it gets us down.

It’s not all about economic stress either – the Growing Up in Ireland report found no correlation between economic hardship and parental stress.

The reason, I think, is to do with expectations. This generation of parents sees itself as more purposeful than previous generations. We’ve witnessed the effects of neglectful or permanently uninterested parents, and are determined not to replicate them.

But we’ve gone too far in the other direction. We have elevated the raising of children to a pseudo-profession. We devour parenting manuals, over-schedule children’s waking minute, hover over them in the playground, micromanaging their relationships. It has become a kind of madness. I know parents who have paid professionals to turn out a school project for their six-year-old and others who have called the school to complain when their child missed a birthday party invitation.

And in the process, we seem to have lost the ability to focus on the little things, the stuff that makes being a parent pleasurable – personally, I’m not sure anything can surpass the feeling of a small hand in mine.

I long ago lowered my expectations of myself, and I regularly remind my children to lower theirs. These days, I aim for a benign mediocrity. On my good days, I just about get there.

The secrets to growing an exotic Irish garden
5