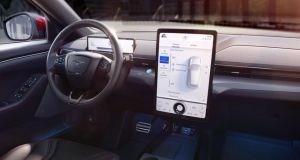 Possibly, it’s for the best. After all, most car dealers – oft overworked as they are – usually don’t have the time to take a new car owner through every single system and item in their new set of wheels.

Whereas once, it was enough just to point out where the indicator stalk and the seat adjusters were, now, with the advent of touchscreens, cars have functions and sub-systems as potentially complex as any lap-top.

Ford, though, wants to bypass all of that with the latest generation of its SYNC infotainment system. SYNC originally debuted in the Ford Fiesta, and was at first a tiny info screen and a quick-responding Bluetooth connection for your phone.

Now? Well, it’s all a bit more complicated than that now.

The latest Ford SYNC system will make its debut in the upcoming Mustang Mach-E electric SUV, and what with infotainment systems being as important, if not in some cases more so, than the rest of the car, Ford has given us an early intro to the Mach-E’s big new screen.

Big being the operative word. It’s a 15.5-inch unit, taking clear inspiration from Tesla, and it dominates the Mach-E’s cabin. It’s not entirely a touch-screen – there is still a physical rotary controller for the stereo volume, something that Ford’s customers insisted upon when consulted during the design phase.

While many of the big screen’s various systems and functions have been seen on other vehicles, one new idea is that of remote vehicle setup. “This new feature allows you to pre-configure many of the vehicle settings, such as driving and charging features, from the comfort of your armchair, even before you pick up your vehicle” Divya Sebastian, a specialist in Ford’s FordPass smartphone software told The Irish Times.

“Mach-E customers can enjoy the most seamless pre delivery personalisation experience in the industry. And what we call set-up is a quick and easy way to personalise your Mustang Mach-E before it’s even in your driveway.”

Basically, when your shiny new electric Ford is being shipped to your local dealer, you’ll get an email alert, prompting you to sign in through the FordPass phone app. Through that you’ll be able to tweak all of the car’s various settings to your liking before you’ve even sat in it. You’ll also be able to set your phone (depending upon the model and the market) up as a car key, and for low-battery emergencies, there’s a touch-sensitive keypad on the Mach-E’s door to let you in.

The system also allows you to set up other drivers with their own profiles. It’s also a learning system. “A good example is, I usually call my husband on my way home from work. After SYNC learns this routine, it will automatically suggest that I give him a call at that time of the day on my drive” says Sebastian.

“It also memorises my schedule, knowing when I usually leave home or work and prepares the vehicle for my departure, like, making sure the cabins at my favourite temperature when I climb but also FordPass can show me personalised tips on how I can drive more efficiently with the my journeys feature. It analyses my trip, shows me where I braked too suddenly or accelerated too fast, or even cornered too harshly. So all of this represents a major leap in personalisation of the drive experience, and really is at the cutting edge of this kind of technology.” One is tempted to suggest that HAL 9000 might have been a better name than SYNC.

The design of the big SYNC screen does seem to have taken note of criticisms of other systems and their propensity for burying functions at the end of long tunnels of sub-menus. “If you notice a lot of systems today, they’re kind of hierarchical and you got to dig deep into the sub menus to reach a specific action” Husein Dakroub, Ford’s SYNC software supervisor told The Irish Times.

To do that, Ford has basically divided the screen in three. The top third is occupied by whatever function or app you’re currently using, be it navigation, media player, or a third-party app such as Waze or AccuWeather, both of which are built-in to the system. In the middle of the screen is a lineup of ‘card’s that not only gives you short-cut access to commonly used features, but which also gives you direct control of them without needing to switch the display over.

Finally at the bottom, rather sensibly, the heating and air conditioning controls are always present, so that changing the cabin temperature, or turning on the de-mister is a one-touch job.

Ford is also hyping up its voice control, which it says can now cope with normal speech patterns in as many as 15 languages (with more on the way). Other major functions include over-the-air software updates (which Ford claims will not leave you hanging around, waiting for a blank screen to boot up) and cloud-based maps that include real-time traffic data as well as parking locations.

There’s also a trip-planner that routes you via the best charging points on longer journeys, giving you real-time charger availability updates.

Indeed, Ford says that this new software can actually reduce your range anxiety, especially for those new to electric motoring. “At Ford, we have reimagined the whole charging experience from the drivers perspective to make it anxiety free” Jan Schroll, Ford’s infotainment manager said.

“If you use the trip planner, this next generation SYNC, and FordPass look after you when you’re on the road by providing real time information about when and where to charge. And now we’re introducing intelligent range technology, which makes knowing how far you can go and when you need to charge a lot more predictable and calculates your available range based on past driving behaviour, weather conditions, driving speeds and terrains, and even data from other Ford electric vehicles about particular roads to predict how much energy you will use.”

Essentially, both the software and the big screen is Ford admitting that it has been lagging behind in the infotainment stakes of late. This massive upgrade could, potentially, leapfrog the Mustang Mach-E ahead of rivals from Tesla and VW when it arrives later in the year. Assuming you can figure out, from the comfort of your armchair, how to use it all, of course.