Drivers have no truck with automated lorries 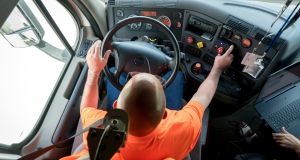 Embark, a Silicon Valley startup, is set to announce that it has been testing its self-driving technology.

Trucks will someday drive themselves out of warehouses and cruise down freeways without the aid of humans or even a driver’s cab. The question is how soon that day gets here.

While the answers vary, technologists, not surprisingly, are more bullish than truckers. Billions of dollars and a growing parade of companies, from tiny start-ups to the country’s biggest trucking operations, are betting it will be here sooner than most people think.

This year, companies and investors are on pace to put just over $1 billion into self-driving and other trucking technologies, 10 times the level of three years ago, according to CB Insights, which tracks the venture capital industry.

Tesla is widely expected this week to showcase an electric truck that will have some self-driving capabilities. And Embark, a Silicon Valley startup, is set to announce Monday that it has been testing its self-driving technology as part of a three-way partnership with the truck-leasing company Ryder and the appliance giant Electrolux.

“We are trying to get self-driving technology out on the road as fast as possible,” said Alex Rodrigues, Embark’s chief executive. “Trucking needs self-driving and self-driving needs trucking.”

Unlike autonomous cars, which face questions about navigating chaotic urban streets, trucks spend a lot of time heading straight on desolate highways. And while the advent of the self-driving car will rest on the decisions of individual consumers, logistics companies are unemotional operators that will upgrade their fleets the moment it makes financial sense.

Trucking is a $700 billion industry that touches every corner of the economy. Trucks haul natural resources from mines and forests. They transport industrial building blocks from manufacturers and deliver goods to stores and homes. Virtually every physical product from food to paper towels and furniture has touched a truck several times by the time it gets to a consumer’s hands.

Even companies not explicitly chasing the goal of self-driving trucks are moving steadily toward a more automated future. The 7,000-plus trucks owned by US Xpress, one of the nation’s largest trucking companies, have been updated with autonomous braking and collision-avoidance systems. Max Fuller, the company’s co-founder and executive chairman, plans to upgrade them to have automated lane steering in three years.

“I’m putting building blocks into my trucks that each year gets us closer and closer,” he said.

One afternoon in Florida, a 59-year-old career truck driver named Jeff Runions sat alertly in the cab of an 18-wheeler watching the road while his 11-ton cargo of stone tile made its way up the Ronald Reagan Turnpike. He was watching his steering wheel, too, but his hands were at his side: A computer was in control.

Runions works for Starsky Robotics, a San Francisco startup that for the past two years has been testing its self-driving technology by running freight up and down Florida. The runs help collect data and hone the technology, in hopes of convincing regulators and the company itself that self-driving trucks are ready for business.

Starsky’s ultimate plan, of course, is to eliminate Runions’ job. But they do not want him to be out of one. Stefan Seltz-Axmacher, Starsky’s 27-year-old chief executive, foresees using self-driving technology to replace long-haul drivers on freeways, but having people like Runions navigate at either end of the trip with remote control consoles that look like an arcade racing game.

Drivers would go off to work in offices and might spend their day driving trucks through the last few miles of several different routes in several different cities before heading home for dinner. “One driver can drive 10 to 30 trucks per day,” Seltz-Axmacher said.

Starsky’s vision of a remote operation is unique. But the basic idea of having trucks drive themselves on highways and letting human drivers take over in complicated city environments is something of an industry consensus.