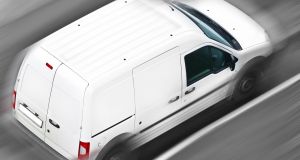 Last year more than 9,000 of the commercial vehicles that failed were deemed unsafe to drive from the test centre

A 30 per cent cut in the annual cost of a commercial vehicle test has been proposed by the Road Safety Authority in a bid to increase compliance rates.

The roadworthiness test for vans, goods vehicles and buses is operated by the RSA, which is very concerned about the low levels of compliance. A valid certificate of roadworthiness (CVRT) is a requirement for every commercial vehicle in the same way a valid NCT is required for cars. Testing is carried out in a national network of test centres.

According to the RSA, for light-goods vehicles of less than 3,500kg only three out of every five vehicles has secured its test “on time”.

This 59 per cent compliance rate was also recorded among goods vehicles of 3,500kg-7,500kg.

The largest goods vehicles, those over 7,500kg, have a compliance rate of 77 per cent.

The RSA says compliance rates with the certificates, while low, are rising. However, to accelerate the process, it has suggested a sharp cut in the cost of testing a commercial vehicle.

The cost of testing a commercial vehicle ranges from €94 to €220 before VAT, depending on the type of vehicle. Among the vehicles that require a certificate are vans, trucks, HGVs, emergency vehicles coaches and buses.

More than 9,000 of the commercial vehicles that failed the test were deemed unsafe to drive from the test centre and were removed from the road immediately for repair or to be scrapped.

The RSA also conducts roadworthiness inspections at the roadside; last year it checked 15,926 vehicles. In 235 cases the vehicle checked did not have a valid certificate of roadworthiness.

The authority also expressed particular concern that of the 1,207 buses checked at the roadside last year, half were found to be defective and a third of these defects were found to be “major or dangerous”.

As a consequence the RSA said it had expanded its inspection efforts on the school bus sector this year.

When outlining the rationale for the cut in fees, the chief executive of the RSA, Moyagh Murdock, said the measure was a proposal for one year on a trial basis to see if it prompted an increase in compliance.

Discussions on the proposed cut in the fees are now taking place between the RSA and the Department of Transport.

Along with the RSA roadside inspections, since 2015 gardaí have been using on a trial basis two automated number-plate-reading cameras at “some checkpoint locations on a trial basis.

The RSA said this trial was continuing and the lessons of this project would feed into a second ANPR pilot, due to start next year.

When asked if having a valid commercial roadworthiness cert was required in order for insurance to be obtained for a commercial vehicle, a spokesman for Insurance Ireland replied: “Private and commercial motor insurance holders are required to maintain their vehicle in a roadworthy condition. This is a condition of the policy and failure to adhere to it could have a material impact if making a claim.”