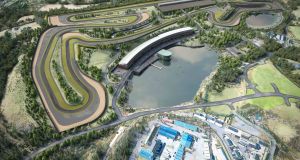 On course: the finished Lake Torrent track will be a 3.6km course, with 12 corners, attended by the usual collection of pit, paddock and support buildings

A former clay pit, some 40 minutes from the centre of Belfast, is set to be redeveloped into a new motor racing track and events arena. The project, dubbed Lake Torrent, has been given planning permission clearance by Mid-Ulster Council, and ground-breaking has already taken place at the 157-acre site in Coalisland, Co Tyrone.

The finished Lake Torrent track will be a 3.6km course, with 12 corners, attended by the usual collection of pit, paddock and support buildings, including a medical centre, restaurants and even a creche. A new ring-road, between the existing Dungannon Road and Derry Road, will also be built, and there are proposals for an adjacent technology and business park.

The Lake Torrent track is the brainchild of David Henderson, the Larne-based chief executive officer of Manna Developments. “It is a three-phased project over three to four years with the whole circuit being developed over 18 months,” he said. “We hope to do a track launch in the early part of spring 2019. The purpose is to attract four major events to Northern Ireland per year for both cars and bikes. The funding is all private equity, there are no grants or government funding, and it’s achieved outside of Northern Ireland.”

What those four major events might be has not yet been specified, but the track’s designers, UK-based Driven International, says that they are seeking FIA and FIM approval, which could potentially allow the likes of the British Touring Car Championship to come to the track, along with Superbikes or even Moto GP bikes, which would doubtless please the large biking-mad fan base of Northern Ireland.

“There are 12 days, per year, set aside for major race weekends,” said Henderson. “The track will be open throughout the year, for track days, corporate days and championship events. We have got the licence, we have got the planning and everything else to do this. We have got the sound take on it, we have been to Geneva three times and have got approval from FIM, FIA and we are working through MSA [Motor Sports Association, the British motorsports governing body].”

With £30-million due to be spent on the development of the track, as many as 700 jobs are expected to be created in the local economy, while the track itself will need about 25 permanent staff, and some 50 occasional staff.

Initial construction is expected to begin within weeks, which includes the race circuit, pits, medical centre, restaurant, hospitality suites, six business units and crèche, as well as the ring road. This first phase is due to be completed in early 2019 but the potential for further jobs within the overall complex is also huge with plans for the second phase of works submitted to build a further 90 retail and business units, and a range of community and leisure facilities including a hotel, cinema, theatre and more food outlets.

The venture has cross-community support too, with Sinn Féin’s local MP Francie Molloy praising the project. “When David first approached me about a site, I said I have the ideal place – the clay pits in Coalisland. He outlined his proposal of a safe motor racing track and all of the associated elements within the centre, and we discussed job creation and skills training for the area.”

Local DUP councillor and chair of Mid-Ulster Council Kim Ashton said: “With the beginning of this project comes substantial investment and employment, the rejuvenation of an unused site, and the development of a centre of excellence for motorsport which will attract significant visitor numbers. I am delighted to see work start and wish Lake Torrent well at this milestone in the project’s development.”

There will doubtless be concerns, in some quarters over the long-term viability of the project. Ireland already has Mondello Park just outside Naas in Co Kildare, and both Nutts Corner and Kirkistown not far from the new Lake Torrent site in the North.

There are also street-racing circuits, primarily for motorbike races, at Skerries in north county Dublin, and at Coleraine. Then there is the ominous tale of the Formula-One-spec track in Wales, the so-called Circuit of Wales, which disintegrated in ignominy, having failed to meet its funding targets.

However, Lake Torrent will be hoping that the fact it uses no public funding will help its cause, as will the fact that Mid-Ulster Council received only seven letters of complaint with regard to the planing permission, surely a record for a major racetrack development.