X-Storage system can be charged up with low-cost night-rate power, or from solar panels 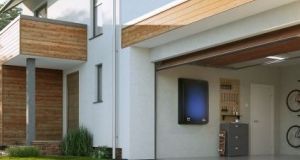 The X-Storage system is designed to be charged up overnight, storing energy in a compact battery pack, about the size of an electricity meter box, that mounts on to the wall of your house

Nissan Ireland has announced that from next year it will offer a battery system for homes and businesses, which is claims has the potential to reduce electricity costs, and ease demand for power at peak times.

The X-Storage system is based around recycled batteries taken from Nissan’s Leaf electric car fleet. It’s designed to be charged up overnight, storing energy in a compact battery pack, about the size of an electricity meter box, that mounts on to the wall of your house. The battery has built-in inverters, so it can either charge from cheap night rate electricity and then reverse the flow, either supplying your house directly, or potentially even selling electricity back to the grid at peak times. It can also provide energy to the house in the event of a power cut.

It has also been designed to work hand-in-hand with Nissan’s electric vehicles, and can draw on excess battery charge left in a Nissan Leaf or eNV200 van, and use it to power your house at times of high demand, or during a power cut. The charge is then returned to the car battery later on.

Prices have not yet been set. A spokesperson for Nissan Ireland told The Irish Times that: “We have not yet launched the solution so difficult to quote a cost. Cost varies depending on whether you buy an X-Storage solution made from re-generated batteries or new batteries and the size of the battery you purchase. X-Storage has recently gone on sale in the UK and ranges between £3,000 and £5,500 (€3,347 and €5,579).” It has also not yet been decided whether Nissan Ireland will follow the UK’s lead and also become a supplier of solar panels to work with X-Storage.