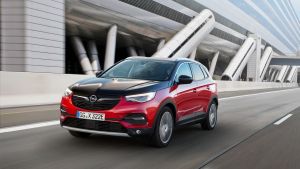 Opel’s Grandland X Hybrid4 weighs in at more than 1,800kgs.

Opel’s recent adoption by the French – you could say rescue – is gradually starting to bear fruit. The rapid turnaround of the new Corsa is a case in point, with Opel’s initial plans binned and replaced with a fast-tracked project to marry the underpinnings of Peugeot’s equivalent hatch, the new 208, with some Opel styling and characteristics. So far, so fruitful.

The Grandland X, another forgettably named Opel crossover, is also the beneficiary of a little French love. For a start, it comes with a plug, attached to the same battery-power/fossil fuel hybrid combo offered on a soon-to-arrive popular Peugeot equivalent.

It’s part of the fleet of new plug-in hybrid crossovers silently slipping on to the shiny showroom tiles of late.

This is the biggest Opel offering in the crossover market, joining the small Mokka and the mid-range Crossland. No, don’t beat yourself up if you can’t recall what either of those cars look like. I suspect even some Opel dealers have struggled on that front at times.

The good news for the Opel brand is that it got first crack at this new hybrid set-up and for that it gets the kudos. The power comes from combining two electric motors – one on each axle – with a 200bhp 1.6-litre turbocharged petrol engine. With more then 100bhp from the rear axle motor, that gives you the four-wheel drive format, while the front motor joins forces with the petrol engine to provide power to the two wheels up front.

A front-wheel-drive version, putting out 225bhp, is also on offer.

Under the cabin sits a 13.2kWh battery pack that delivers a surprisingly reliable 50km or so fully-electric range. Now the usual caveats apply, so if you rush around and race away from standing starts, the range is going to drop. But having spent the last few months seemingly driving little else but cars with varying degrees of battery power, I admit to being very pleasantly surprised to get just under 50km in range from a single full charge; and that included 30km or so of motorway speeds. It’s all the more remarkable when you consider its size: this Grandland X hybrid4 weighs in at more than 1,800kgs.

Of downsides, there are a few and the cabin is the biggest one. Yes, it’s spacious, but only on a par with rivals. For a similar outlay, motorists could get more in terms of boot space. As for the fascia and controls, in the age of high-tech widescreen presentations and soft-touch plastics, there’s a bit too much hard black plastic. Clearly Opel egos still aren’t ready to admit that the French are streets ahead in terms of their cabins, but it’s time to sheath their pride and let the French hold sway in terms of cabin control design.

Where Opel has always done relatively well is in driving dynamics. The Grandland is never going to be an engaging drive, but it is certainly refined as an everyday runaround, while the fact it turns to battery power when moving off from a standing start means it has a nice pace off the blocks. The most impressive driving feature is the steering, which feels more adept than you might expect from such a large block of metal. However, the laws of physics come into force in the corners, where it does tend to lean and roll. This is, of course, a nearly two-tonne family hauler, not a sports coupe, so that’s only to be expected.

As the latest offspring from the rather rushed Franco-German marriage of convenience, it’s a worthy rival to the host of other plug-in hybrids hitting the market right now.

Priced from €47,415 after grants for the four-wheel drive (or €36,645 for the front-wheel-drive variant), it faces stiff opposition from the likes of the new Ford Kuga, or from several plug-in hybrid newcomers due to land in the coming months. The Grandland suggests the dawn of Opel’s new era is within sight, if not quite here just yet.

Verdict: Welcome contender to the plug-in ranks and further proof that Opel is moving in the right direction