Car makers will use tech to remotely enforce speed limits 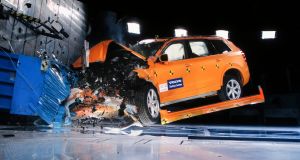 To emphasise its safety message, Volvo held a high-speed test crash demonstration at its Car Safety Centre. When developing a new car, 60 to 70 examples of the model are physically crashed with 20,000 computer simulated crashes carried out in tandem.

Volvo predicts a mandatory speed limit will be imposed on all new cars in the near future while vehicles will be automatically restricted to set limits in areas like schools.

The Swedish-based premium car says it plans to use GPS technology to create areas where its cars will automatically slow down, such as around schools. The technology, which involves knowing the car’s location and the conditions around it, will also allow it to limit the speed of vehicles during icy or foggy conditions, making it “more effective” than speed signs, said Hakan Samuelsson, Volvo Car’s chief executive.

“You will know the road is eight metres wide and is rather curvy, and now it’s freezing and it’s dark and it’s snowing. You could have very good algorithms calculating that you should not be able to drive faster than 75km/h on this road,” he said.

Volvo has launched a new safety campaign, hoping to replicate its initiative in the roll-out of three-point seat belts did 60 years ago. This time the company is focussed on using technology to eliminate drunk driving, smartphone distraction and speeding among its owners.

Several years ago Volvo laid out its Vision 2020 mission statement to have no one killed or seriously injured in a Volvo built from that date. The clock is ticking with only months left. This mission has been refined and developed further. Last week Volvo announced a number of practical actions it will take to make the roads safer while also calling on the motor industry to step up and do its part too.

At present many car companies voluntary install electronic speed limiters set to 250km/h on cars with engines capable of higher speeds. Volvo says an industry-wide limit is likely to be imposed in the future, and it set the ball rolling earlier this year by announcing it was limit its new cars to a speed of 180km/h (112mph) from next year.

The next phase will be to impose automatic restrictions on vehicles depending on their location. Jan Ivarsson from the Volvo Safety Centre said smart adaptable speed limiting technology could enforce 30km/h limits outside schools, for example.

Another new feature for Volvo is the Care Key initiative. Standard on all Volvos from 2021, it enables owners to set the speed limit their car can achieve for themselves or others while driving. If this sounds familiar, it is: Ford’s MyKey feature is already on the market and aimed at parents whose children have started to drive. Ford’s MyKey allows certain functions of a car to be limited like radio volume and maximum speed.

Volvo is also opening its database of real world crash research to rivals. By placing its library of data on line for free, excluding some GDPR information, it is actively encouraging rivals manufacturers to use its data to improve our roads for everyone.

“We have data on tens of thousands of real-life accidents, to help ensure our cars are as safe as they can be for what happens in real traffic,” says Lotta Jakobsson, professor and senior technical specialist at Volvo Cars Safety Centre. “This means our cars are developed with the aim to protect all people, regardless of gender, height, shape or weight, beyond the 'average person’ represented by crash test dummies.”

Volvo also wants to prevent collisions caused by drink-driving and distraction. US collision figures for 2017 reveal almost 30 per cent of all traffic fatalities involved intoxicated drivers.

Volvo’s answer is to install cameras and other sensors to monitor the driver. If the driver is acting erratically or is distracted and the camera data fell below set parameters the car would intervene. This could take the form of visual or audible warnings, an in-car phone call from an operator at the ‘Volvo Call’ response team, and ultimately the car’s speed could be limited or even slowed safely to a stop and the vehicle moved to the side of the road and stopped.

“When it comes to safety, our aim is to avoid accidents altogether rather than limit the impact when an accident is imminent and unavoidable,” says Henrik Green, senior vice president, Research & Development at Volvo Cars. “In this case, cameras will monitor for behaviour that may lead to serious injury or death.”

So how would the car know a driver was unfit to drive? Examples would be a lack of steering input for extended periods of time, the driver’s eyes closing, again for extended periods, eyes straying off the road, weaving out of the lane or excessively slow driver reaction times.

It all raises questions about whether car companies have the right or obligation of the motor industry to track, monitor and intervene. Yet Hakan Samuelsson has no doubt about it: “Even if we save only a few lives it is worth doing.”

Comfort eating your way through the pandemic? You’re not alone
6