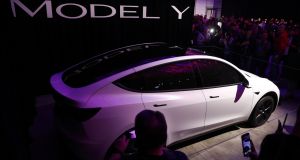 The Model Y resembles a shrunken version of Tesla’s Model X. Unlike that car, though, it does not have rear doors that open vertically 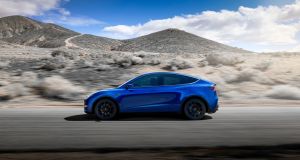 The Model Y will be able to sit seven, using a third collapsible row of seats, and has a glass roof, like the X. 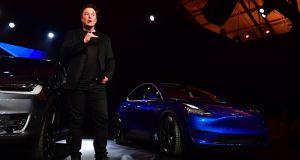 Elon Musk on Thursday night took the wraps off the vehicle designed to complete Tesla’s push into the mainstream: a crossover between a car and a sport utility vehicle designed to sell for less than $40,000 (€35,300), tapping one of the most popular parts of the US market.

However, Mr Musk disappointed Tesla bulls when he said the new Model Y would not hit the streets until the second half of 2020 – later than the mid-year launch many had been hoping for.

He also indicated the company would start out by selling only higher-end versions of the vehicle with longer battery range, pushing back the hotly anticipated $39,000 version until the spring of 2021.

The longer timetable on the Model Y follows a delayed ramp-up of Tesla’s first attempt at a mass-market vehicle, the Model 3. Tesla’s delays have risked narrowing its lead over other carmakers that are racing to bring out electric models of their own.

That Model 3 was unveiled three years ago this month, but it was not until last month that Tesla started to take firm orders for the lowest priced, $35,000 version of the car that Mr Musk promised back in 2016.

The Model Y resembles a shrunken version of Tesla’s Model X, a crossover SUV that sells for $100,000, once extras are included.

Unlike that car, though, it does not have rear doors that open vertically – a feature that greatly complicated the production of the X, and which Mr Musk has since said he regretted.

The new vehicle will be able to sit seven, using a third collapsible row of seats, and has a glass roof, like the X.

“I think we’ll probably do more Model Ys than S and X combined,” Mr Musk said, a reference to his company’s higher-end vehicles, of which the group sells about 100,000 units a year.

The unveiling of the Y, at Tesla’s design studio in Los Angeles, followed a turbulent start to the year for the electric carmaker and its outspoken chief executive. Its shares fell 17 per cent over the past two months, as Tesla cut staff and warned of a return to losses in the current quarter.

Mr Musk is also awaiting the decision of a New York judge over an application by securities regulators that he be found in contempt of court for tweeting material financial information about his company, in contravention of a court ruling to which he agreed last year.

Standing in front of a line-up of the four vehicles, Mr Musk said: “We are bringing ‘sexy’ back quite literally” – a reference to his efforts to spell out the word “sexy” using the names of his company’s models.

However, Tesla was unable to secure the rights to the Model E name, forcing it to opt for the Model 3 and leaving it with S3XY. – Copyright The Financial Times Limited 2019