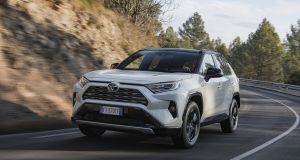 The new Toyota Rav4 ticks a lot more boxes. For a start it has the rugged image. It also has the family space 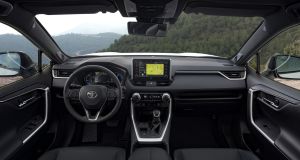 Inside there is space for five adults, while boot space hits 542 litres. While some may consider the cabin less refined than rivals, there is a proper sense of rugged toughness about the fit and finish 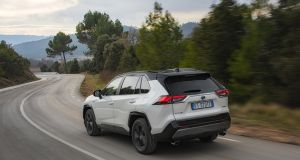 The four-wheel drive doesn’t just feature an extra 4bhp, but boasts a second electric motor for the rear wheels that gives the car much sharper handling and controlled power delivery 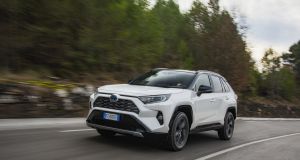 When your life depends on a car’s reliability those in the world’s hotspots tend to turn to two models: the Hilux and the Land Cruiser. From the mountain passes of Peru to the hills of Afghanistan and the plains of the Serengeti to the desert battlefields of Syria, Toyota is the favoured choice.
The Japanese car giant cowers from marketing its high regard among Islamic State fighters or anarchist revolutionaries in Central Africa. If former Aer Corp member Lisa Smith makes it back to Ireland, don’t expect her to be fronting a Toyota campaign anytime soon.
The strange case of Toyota’s strength in the roughest and most rugged terrain is that it has never made more of its SUV heritage when it came to crossovers. You would have thought that a company with the sort of off-road credentials that makes it a farm favourite should have been pushing this message when it came to creating the Rav4. Yet for years the Rav4’s character was all rather woolly. The Korean brands – with no heritage in this market – ate its lunch, while its Japanese rival Nissan lured families with its Qashqai. Meanwhile the last version of Rav4 was a glorified people carrier rather than a crossover.

Now comes a Rav4 that ticks a lot more boxes. For a start it has the rugged image. It also has the family space. Drop the Toyota badges and this would be a big draw to image snobs who would perfectly suit a Land Rover badge.

Another lure is the hybrid powertrain. Diesel is dead, at least for this crossover range.

Motorists are debating the merits of diesel these days, and while it certainly has its place for high-mileage motorists focused on fuel economy, the reality is that many crossover buyers are suburban drivers doing up to 20,000km a year. If that’s your annual mileage, then hybrid is a definite consideration.

Buyers are understandably concerned that diesel is on the Government’s hitlist when it comes to environmental tax. At the same time they are rightly concerned that hybrid will seem old hat when we do move to fully electric car transport. If so, they can take some comfort from most predictions  that the transition for many motorists will take a decade or more.

In reality the outgoing diesel Rav4 wasn’t up to much in its performance, seen off by stronger rivals. Going hybrid-only was the right option for Toyota.

The 2.5-litre petrol engine with CVT automatic transmission is matched to an electric motor to put out 218bhp in this test car’s two-wheel drive format, or 222bhp in the four-wheel drive version. The hybrid set-up means emissions of 105g/km (128g/km under the new more realistic WLTP system). Fuel economy comes in at 4.6l/100km or 61.4mpg under the current testing system (5.6l/100km or 50.4mpg under WLTP). During our test in the car we were achieving a decent 6.4l/100km (44 mpg), though it did rise to 7.1l/100km (under 40mpg) on some trips. Those figures are nothing to shout about but they’re credible for suburban motoring.

Underpinned by the company’s well-regarded new platform, the hybrid system is well cosseted from the cabin. Our regular gripe about the Prius is the annoying whine it emits when you kick down the throttle, but with the 2.5-litre engine up front and seemingly more attention to cabin acoustics, most if not all of that issue is remedied. It proves that if you put the right sized engine in the mix, not only does the engine whine abate, but the whining of motoring hacks like me does as well.
Four-wheel drive is a particularly strong feature on the new Rav. My esteemed colleague Neil Briscoe got to take the all-wheel version off-road in some really sticky situations a few months ago and was duly impressed. For him, it’s definitely worth the extra spend to opt for it over the two-wheel drive version.

The four-wheel drive doesn’t just feature an extra 4bhp, but boasts a second electric motor for the rear wheels that gives the car much sharper handling and controlled power delivery.
Handling is perhaps the weakest point in the story of the new Rav4. The ride quality is impressive when cruising around town and on themotorways, but in corners it does tend towards understeer too easily, and there is a fair degree of bodyroll when you try to weave it through the bends. This new platform has performed with aplomb on the C-HR so it shouldn’t really rock and roll to the extent it does on the Rav4.
Don’t get me wrong, it’s far from the bottom of its class on this, but it’s just that so many other facets of the car positively surprised, I was disappointed with its dynamics in this regard. Of course, for most owners, they’re looking for comfortable, reliable family motoring, but if you want more driving fun and decent off-road ability then take my colleague’s advice and opt for the four-wheel drive.

Inside there is space for five adults, while boot space hits 542 litres. While some may consider the cabin less refined than rivals, there is a proper sense of rugged toughness about the fit and finish.
It’s like a well-appointed version of the Subaru cabin. If you want class and premium appeal, then let me direct you to Toyota’s C-HR crossover. This is closer to what you get from Toyota’s rough and tumble Land Cruiser. Again that’s a smart move for it links the car back to the strongest off-road bloodline in the range – and arguably on the market.
Toyota is undergoing a major revolution of late. It’s best-selling – but historically bland – Corolla is finally full of character. At a time when many motorists are thinking hybrid, its range is right on message. The C-HR could easily qualify as a premium rival, while the new generation Camry is about to make a welcome return to the market.
It always seemed bizarre that Toyota didn’t marry its incredible credentials with the Land Cruiser, and even Hilux, on the crossover market. This Rav4 finally does that job. Better late than never – and with the suburban lure of hybrid to boot, this is suddenly a really serious player on the mainstream crossover market.