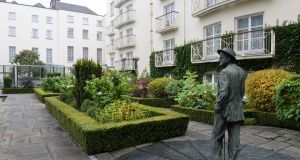 The garden at the five-star Merrion Hotel, Dublin. There are some 1,750 five-star rooms in Dublin and all the 5-star hotels including the Merrion, the Shelbourne and the Marker remain open. Photograph: Dara Mac Dónaill

Hotels in Dublin are offering discounts of almost 50 per cent in the coming weeks with a night for two in some five-star hotel rooms and breakfast in the morning now going for less than €200 a survey published today suggests.

And with hotel occupancy at its lowest level in history, people living Dublin – and unable to leave the county as a result of travel restrictions – have been encouraged to support local businesses by considering booking dinner, bed and breakfast in a hotel close to home .

Taking advantage of deals currently on the table could see people who find it impossible to find a night out in restaurants paying little more than the cost of a meal out in the city, taxies and drinks would have cost in pre-Covid times , according to a spokesman for property advisors Savills Ireland.

Its report suggests that more than 3,000 hotel bedrooms in Dublin – or 14 per cent of the total stock – remain closed or in alternative use, such as for the provision of HSE accommodation as a result of the crisis.

At the same time, Covid-19 restrictions have resulted in a dramatic reduction in business, which have led to hotel operators offering significant discounts in order to boost business and generate some revenue.

Savills analysed year-on-year rates for a one-night stay in the capital – including breakfast for two – across all hotels in Dublin and found that the average rate for 5-star hotels is €250, with some availability under €200.

By contrast, in September and October of last year prices averaged over €400.

The report says that there are around 1,750 five-star rooms in Dublin and all the 5-star hotels including the Merrion, the Shelbourne and the Marker remain open.

The average daily rate for the city’s four-star hotels, meanwhile, was put at €130 although there was a wide choice of rooms in such hotels for less than €110. Last September and October, prices averaged €200.

Savills Ireland said there were approximately 13,400 four-star bedrooms in Dublin with 1,600 of these rooms closed or in alternative use.

The average daily rate for three-star hotels meanwhile was put at €110 compared to an average price this time last year of €150.

There are close to 5,400 three-star bedrooms in Dublin and 800 of these rooms are either closed or in alternative use.

“Hotel occupancy rates are at their lowest point in history, so it’s no surprise that there are amazing deals to be had,” said Savills Ireland director of hotels & leisure Tom Barrett.

“However, in the long-run, operating at this level is not commercially viable, therefore – assuming 2021 brings some level of normality back to the tourism and hospitality sector – prices will recover, but it could take a few years to return to pre-Covid room rates.”

He said that there had been considerable focus on supporting retailers by shopping locally “and rightly so” but suggested that it was “also important that we support the hotel industry, the bedrock of tourism in Ireland, by staying local”.

He said current restrictions had made it difficult to go out for a meal or a few drinks on a Saturday night, “but if you shop around, it’s not too hard to find deals that offer dinner, bed & breakfast, for a very attractive price, compared to what you might have paid for a ‘normal’ night out in Dublin, with a bar, restaurant, and taxis.”