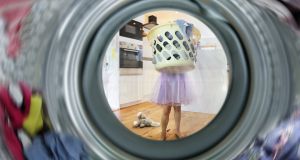 Microplastics can be released into the water system via the washing of fleeces or other clothing containing plastics.

Microplastics were back in the headlines recently, with a study revealing that bottle-fed babies can swallow millions of these particles a day. The research team, based at Trinity College Dublin, found that the high temperature process of sterilising bottles can cause the release of millions of microplastics. The findings have been described as a “milestone”.

It was already known that microplastics can be found in almost every part of the planet – from Arctic snow and household dust, to the bellies of whales and even in the human gut. What makes this study different, however, is that it reveals that their presence is far greater than previously thought. The World Health Organisation (WHO) had estimated that people generally consume about 300 to 600 microplastics a day; this new report found it could be much higher than that, and closer to the millions.

So what are microplastics? They represent a diverse range of material types, shapes, colours and sizes, but are generally smaller than 5mm in length. They enter the environment in various ways such as surface run-off or wastewater effluent or, they can be released into the water system, for example, via the washing of fleeces or other clothing containing plastics. Microplastics are either manufactured (in cosmetics, such as microbeads) or derived from fragmentation of larger plastics over time.

There are more than 14 million tonnes of microplastics on the ocean floor, according to research published last month by Australia’s national science agency. The risks posed to aquatic ecosystems are vast and have been found (among other things) to disrupt reproductive systems of fish and other marine life, stunt growth and cause liver damage.

For humans, however, the risks associated with ingesting microplastics are not yet known. While these particles are often excreted, it’s not known if they can be absorbed into the bloodstream or other parts of body. In 2019, in concluding a study into the presence of plastic particles in tap and bottled water, the WHO called for more research into the presence of microplastics in the environment and their impact on human health. It also called for far greater management of microplastics in the environment.

What’s unnerving about all of this, of course, is that we can’t always see the plastics we are ingesting. We know they can be found, for example, in most brands of tea bags. Or in the foil of crisp packets or take-away coffee cups. And last month’s Irish study also revealed that food preparation in plastic containers can lead to greater human exposure to microplastics. Official guidance, however, has not yet been issued to concerned parents using polyproplene bottles (which make up 82 per cent of the world market) in light of the study’s findings on babies’ bottles.

There is much more to be understood about the hidden presence of these particles in the environment and their effect on humans, and this latest study has made it clear – again – that we are still using way, way too much plastic. @SorchaHamilton