Why do people think it’s okay to ask how much your home cost?

Househunter: We’d rather not even think about that final sum ever again 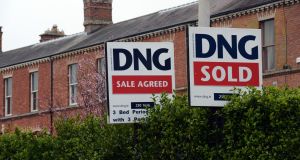 “How much we paid for it in the first place can mean our mortgage repayments could be double or half those of the people next door.” Photograph: Cyril Byrne

The question makes my insides squirm. Most people wouldn’t dream of asking even the closest friends or relatives how much they earn, so why do so many think it is perfectly okay to inquire how much they paid for their house?

I’ve tried to shrug it off. “Oh, too much,” (which is probably true), but some people insist on pressing. “No seriously, how much?”

In this market, most first-time buyers like us have to put every penny they have (plus whatever they can beg or borrow) into the pot when bidding in the hope of landing a sale and finally getting the keys to their first home.

With few exceptions, Central Bank mortgage lending rules now strictly limit the amount an individual or couple can borrow to 3½ times their combined annual salary. How much you pay for your first home is probably the greatest outward indicator of your income.

Many of us are lucky to receive a gift or loan from family – and in this market, it is almost essential. The vast majority of friends in a position to buy recently have only been able to do so because their deposits have been supplemented by such presents, or in cases like ours, inheritance following the death of a parent or close family member.

That is a travesty. Couples in their mid-30s with decent jobs should be able to comfortably afford a small starter home in Dublin without a dig-out from family, alive or dead.

Just because it is public knowledge, doesn’t mean we are comfortable talking about it

With such rapid price fluctuations in the property market in Ireland in the past two decades, the worth of our homes – the biggest financial investment most of us will ever make, and our most valuable asset – has more than doubled, then halved, then almost doubled again. How much we paid for it in the first place can mean our mortgage repayments could be double or half those of the people next door, who may have bought only a few years before or after us. The volatile Irish housing market has not only gouged a chasm of inequality between generations, but also between peers.

Property prices, whether we own a home or not, are so intrinsically linked to our personal finances it is no wonder we’re collectively obsessed as a nation.

I think I probably asked the same “How much?” question of friends after they bought their homes, not out of nosiness, but self-interest – with our budget, could we afford something similar? If I did, I’m sorry now.

After you buy, the obsession continues, if not deepens. A house came on the market one street over from ours last week, for substantially more than we paid. It’s an insane price for a small two-bed, but instead of despairing for the state of the housing market as we would have a few months ago, we felt relief. Our decision was justified, our investment secure – until the next crash, at least.

Of course, if someone really, really wants to know how much we paid for our house, they can find out with a quick search of the property price register. But just because it is public knowledge, doesn’t mean we are comfortable talking about it. In fact, we’d rather not even think about that final sum ever again if we can possibly avoid it.

From agreeing that price (in a horribly stressful sealed-bid process, which I wrote about previously) to closing the sale took just seven weeks. It felt like an eternity to us, but no one else can believe it happened so quickly. After a ridiculous number of daily phone calls to the bank (which dealt with our mortgage like it was the first they had ever given out), with a simple handshake at the solicitor’s office, our 18-month house-hunt was finally over. The keys were in our hands. Words can’t describe the feeling of turning them in the lock of a home we finally owned.

We had pizza and wine sitting on van cushions on the floor that first night, which will go down as one of the best meals of our lives. Every night after work since we’ve spent sanding and staining and tinkering and fixing, and eating more pizza because we keep forgetting to cook.

I will happily talk the ears off everyone about the joys of watching paint dry, or anything else to do with renovating the house we now proudly call home. Just don’t ask me how much we paid for it.