What to do when a €2.48m mansion with a basement swimming pool just isn't enough 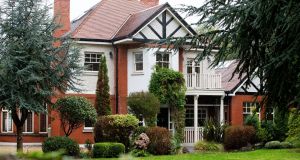 An application to demolish a large, six-bedroom house with its own swimming pool in Foxrock, Dublin and replace it with a large five-bedroom house, and two indoor pools, has been lodged with Dún Laoghaire-Rathdown County Council.

Thornfield, off Westminster Road, was the subject of major, two-year refurbishment in the early 2000s, which included the creation of a new basement with 30-foot swimming pool, the conversion of a garage into a one-bedroom mews house, and the addition of a new wing housing an open-plan kitchen and sitting room, by its previous owners. It also included a two-storey extension to the rear of the house.

At the time of its sale, the house was billed as having been refurbished carefully to be in keeping with the style of the house which was built in 1935, which harkened back to the earlier Arts and Crafts Movement.

In 2017, the owners decided to sell and a deal was reached the following year with the Property Price Register recording a price of €2.475 million in January of this year.

Now a planning application to demolish the house and replace it with a “contemporary” three-storey, five-bedroom house has been lodged in the name of Mariia Elovikova, with an address at Thornfield.

At ground level there is to be an open-plan living/dining/kitchen area while upstairs there is to be four double, ensuite bedrooms, and a master suite with walk-in wardrobe. The first floor will also include a study and a play area.

Outside the new owners plan a two-car, flat-roof garage with basement connection to the main house.

The application says “private open space will be provided in the form of internal courtyards at basement level and ground-floor level, balconies to first floor level bedrooms and a front garden area”. The development also includes all landscaping, drainage and all associated ancillary works necessary to facilitate the development.

Stephen Day of agents Lisney, which had carriage of sale, said demolition and replacement of single houses was “unusual but not unheard of” in the Foxrock area. He said the new owners were “very private people” who would not agree to be interviewed. The planning application names Kevin Hughes, of Hughes Planning and Development Consultants, who also said the new owners would not be available to discuss their plans.