A Georgian jewel in west Cork’s coastal crown for €3.8m

Stone Hall on Glandore Harbour, once left to decay, has been restored to its former glory 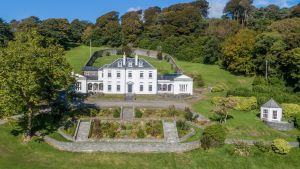 On a sunny September afternoon, small sailboats scud about in the calm waters of Glandore Harbour. Above, the terrace of Hayes’ Bar & Kitchen is filled with happy sippers, soaking up the view. Across the bay sits Stone Hall, and it is nothing short of commanding. Dating from 1760, the house is the earliest of a trio of exceptionally elegant mansions, built in the days when it wasn’t unusual for a large landowner to pop up a couple of sibling edifices to gift to the lucky offspring.

Photographs from the 1920s show severely dressed women of the genteel type on Stone Hall’s front steps. Another, from the 1950s, depicts the house in perfect order, clad with picturesque creepers. But when the current owners, an Irish-UK couple, bought it in 1989, it had become an utter ruin. So what happened?

The answer is roof tax. The controversial tax, introduced by the Irish government in the 1950s, has been blamed for the destruction of thousands of historic and heritage sites in Ireland. Quite simply, if you pulled the roof off a building you weren’t currently using, you avoided paying any tax. The then-owners of Stone Hall clearly had more than one home at their disposal. Once the roof was gone, nature rapidly took its course.

It’s hard to imagine that ruin today, as we sit in the sunny dayroom, with the French windows open to an expansive terrace. The house is a three-storey building flanked by a pair of elegant bays. Everything is in perfect decorative shape, with all the period detailing you could wish for, coupled with contemporary touches where you want them most (ie in the kitchen and bathrooms).

The owners show me a photograph of the house they bought – although “four walls” would be a more accurate description. Trees were growing inside, and all the windows, doors and fireplaces had been ripped out, presumably to grace other houses across the country.

The gorgeous walled gardens were so overgrown, the owners couldn’t even get into them. “We borrowed some goats,” they remember. They hadn’t even been househunting when they fell in love with Stone Hall. “We came for a wedding, and went for a walk . . .” It was a walk that marked the beginning of an extensive, years-long labour of love.

Initially renovating just one wing, which is now a semi-separate guest annexe, the family moved in with their two small children and, little by little, got to work on the main house. “We found oak floors in old schools. And the slates came from Wales,” they tell me, finishing one another’s sentences, as they reminisce about what sounds like an epic version of The Great Antiques Hunt, sourcing the materials to recreate the house.

Doors were copied from the neighbouring houses, which has a nice circularity to it, because they had originally been modelled on Stone Hall. We take a tour, looking at the beautifully proportioned diningroom and drawingroom, the bright kitchen, and the useful utility spaces.

Upstairs are four exceptionally spacious bedrooms, all with en suites. Three have sea views, while the fourth is a charming, cosy space looking out to the walled garden to the rear. Up to the top, and there are three more bedrooms, one currently in use as a games room, bringing the total – including the bedroom in the annexe – to eight. This third floor was added by the owners during the renovation, bringing the total floor area to 325sq m (3,500sq ft).

Outside, terraced lawns sweep down to a little road. Stone Hall also owns the strip of land beyond this, providing direct access to the sea, and your own mooring. There is a little summer house to the right of the main house, and even though the land opens up to, quite literally, own the views, you also have a sense of secluded privacy.

Behind, an old stone wall arcs to enclose more terraced lawns, sheltering the house from the wind. This, in turn, is sheltered by a band of woodland. In all there are five acres of grounds.

Just an hour from Cork city and airport, Glandore has a reputation as a bit of a millionaire’s playground, earned via its extraordinary beauty, sailing and fishing, charming bars and restaurants, and quantity of very fine houses. Stone Hall’s neighbour, Seamark, sold in 2012 for €3.7 million while The Rectory (which completes the trio) sold in 2017 for €1.385 million, a price that reflects the complete renovation and refurbishment that it required. Across the bay, Kilfinnan Castle, which sold earlier this year, is listed on the Property Price Register has having made €5.732 million.

Maeve McCarthy, of selling agent Charles McCarthy, which is handling the sale – at a guide price of €3.8 million – says it “unquestionably occupies one of the finest coastal settings in west Cork”. She’s right. The views to the sea, cliffs and rolling coastline are mesmerising.

“We lead very busy lives, so we come here and just relax,” the owners say. The couple are now regretfully selling, as their children have grown up and moved on.

“Sometimes I come outside with a book, to sit and read on the terrace, and I get so carried away by the view, that a whole hour can have passed and I have forgotten to read anything at all.”