Bathroom blitz: how a small room job can have a big impact

Sort It: How to transform a small, busy bathroom. Step one is throwing out the bath 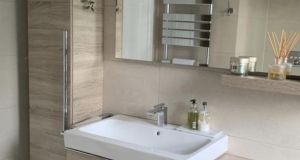 One of the most significant shifts to happen over the last six months is that our homes have come under intense scrutiny. Things we’d be quite happy putting up with have, all of a sudden, become unbearable and demand our immediate attention. This was the case for one of our clients, Angela and her family, who over lockdown decided the bathroom they had made do with for years was finally in need of a makeover. A small renovation has had a huge effect on their day-to-day lives.

Angela’s is a 1970s home, and the original bathroom was tiny with a bath and no shower. “We used the bath a lot when the kids were small,” she says, “But as they got bigger we needed a shower.”

As a quick fix, they installed a tiny shower to tide them over. “We didn’t have much space so could only fit in a very small shower,” she explains. “You nearly had to step over the toilet to get into the shower,” she laughs. “It was purely functional and was only supposed to be something we would have for a short time. But, as with every family, something always came up, so we put the bathroom project on the long finger.”

Over the last six months, like everyone else, Angela and her family have been spending lots more time together at home. “I find I’m prioritising my home more,” she says. “I want it to feel comfortable, to work well and to look nice.

“At one stage there were five of us in the house, four adults and one teenager. We decided enough was enough; the bathroom was in constant demand and just wasn’t working. It’s one of the places we use the most, so we decided to renovate,” she says.

I’ve met many people whose excuse for postponing the “big job” was because they were holding off until their kids were older – only to wake up one morning to find all of their kids were now adults and some had already left home. Doing the big job was no longer necessary, and they had spent the last 20 years living in a home they were never really happy with.

There are stages of life when waiting until your children are older makes sense. A house full of tiny tots and not much sleep is not the ideal setting for tackling a home renovation of any size. But without a doubt, the best time to make significant improvements to your home is at a stage when the whole family can enjoy the benefits of the transformation. So if you’re in a position to do the work, do it.

“I feel like I’m in a spa when I’m in the bathroom. I’m kicking myself I didn’t do it years ago,” Angela says.

Do it your way

Making the best use of the space in the bathroom was the priority for Angela when redesigning the room. “We had a bath that was taking up a lot of space that we hardly ever used,” she says. “For me, creating a spacious room was more important than having a bath that would only be used occasionally, so we decided to get rid of it.”

The space gained by removing the bath has allowed Angela to devote an entire wall to storage, which is invaluable in a bathroom. By stealing some space from the bedroom that backed onto the bathroom, Angela was also able to create a large walk-in shower. “I love having a shower now; before, it was a chore.”

Because the space they took from the bedroom was unused wardrobe space, the bedroom wasn’t compromised in any way. The use of a mirror and wall-hung sanitaryware adds to the spacious feeling. “I now have so much space,” says Angela. “The room feels like it has doubled in size.”

Tackling a project like this is also an opportunity to future-proof your home. “By doing the work to the bathroom, I was also age-proofing my family,” says Angela. With the new design, there are no steps or changes in level because the shower tray is flush with the floor. The layout is spacious and open. It’s now a room that Angela and her husband will be able to use comfortably well into old age.

If you are sitting on the fence, or thinking of starting a project, Angela has this bit of advice: “Don’t be afraid of it. If your home runs smoothly your life will be so much easier.”

Denise O’Connor is an architect and design consultant, @optimisedesign