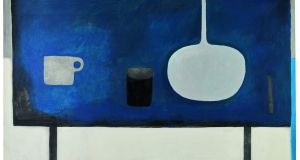 A work by the artist William Scott was the headline sale at a Sotheby’s London auction this week when Deep Blues – part of the collection of Irish art and furniture from the estate of the late housebuilder Patrick Kelly – sold for £837,800 (€943,124) making it the second highest price paid for a Scott at auction.

The sale on Tuesday, which was deferred from March due to Covid-19 restrictions, achieved more than £3.36 million (€3.8 million) against a reserve of £2.05 million (€3.16 million). Comprising much of the contents of Kelly’s Georgian Fitzwilliam Square home, 80 per cent of the lots were sold.

In addition to Scott, two auction records were set when Still Life with Oysters by Patrick Hickey achieved £15,121 and View to Killarney by William Ashford sold for £252,000.

“What was surprising was the number of new collectors who bought at the sale, and we had bidders from 14 countries registered,” said Arabella Bishop of Sotheby’s who handled the sale. “Provenance is everything with a collection like this, and despite Covid-19, I think the reasoning to postpone it from March was the right one as there was so much uncertainty.”

The big surprise on the day – and no doubt it would have generated gasps in the saleroom had it not been empty – were the results for mirrors.

Paddy Kelly’s favourite painting was Harry Kernoff’s O’Mahonie’s Point, Killarney which had an estimate of £10,000-£12,000. It failed to sell – despite three further Kernoff’s being sold, and so returns to the family to remain part of the Paddy Kelly legacy.

Kelly began collecting art, furniture and antiques in the 1980s: “It was such a well curated collection over many decades, and Paddy searched out the best art and antiques which is reflected in the sales results,” Bishop said.