Top house sales of 2018: many top-shelf properties did not sell

This year’s top sale, of €8.1m on Shrewsbury Road, would have lagged in fourth place in 2017 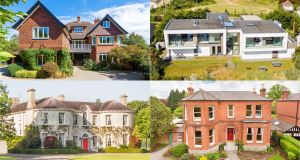 Telephone-sum sales of luxury homes were few and far between this year, leaving an array of top-shelf properties still awaiting buyers.

The biggest residential transaction in the capital closed in recent weeks: the €8.1 million sale of Clonmore, on Shrewsbury Road, to the former Icon boss Ciarán Murray. The 528sq m (5,683sq ft) former home of the developer Paddy Kelly was placed on the market by receivers in September, seeking €10 million through David Bewley of the Lisney agency. Murray retains other properties on Merrion and Ailesbury Roads; with this acquisition he has created something of a golden triangle in Dublin 4’s premium property spot. A colossal refurbishment is likely to follow.

Next up was the purchase of Lota, at 26 Coliemore Road in Dalkey, for €7.5 million by the Kingspan boss Gene Murtagh. It came as something of a surprise, because the luxury seafront property on 0.5ac had not been on the open market. The vendor was the developer Francis Rhatigan, who had bought Lota at auction, in 2002, for €4.5 million. The off-market deal took place over the summer through Simon Ensor of Sherry FitzGerald. The purchase is a departure for the Kingspan boss, who until now has lived close to the multinational’s headquarters, in Kingscourt, Co Cavan. Murtagh is believed to have been Lota’s first and only viewer.

The third-biggest sale of the year was that of Ardmore, at 34 Ailesbury Road in Dublin 4. The semi-detached six-bed on 0.4ac sold through Sherry FitzGerald for €4.875 million. The original asking price was €5 million. The undisclosed buyer is likely to update the property – and may well take a leaf from the book of Shane Ryan, a neighbour. The son of the late Ryanair founder, Tony Ryan, bought the former French consulate next door for about €4 million in 2013 and proceeded with a refurbishment that included a swimming pool and a five-car garage on its acre of grounds.

In May, 41 Cowper Road in Rathmines sold for €4.7 million. The detached double-fronted Victorian with 380sq m (4,088sq ft) and five bedrooms, originally sought €4.9 million when it launched to market in May 2017, through the Sherry FitzGerald selling agent Geralyn Byrne.

Another major off-market sale took place in April when 81 Park Avenue, one of Sandymount’s finest properties, sold quietly for €4.5 million. The smart Edwardian on 0.7ac, previously owned by the late senator Eoin Ryan and acquired in 2004 by the businessman John Pugh, for €7.1 million, was placed on the market through Lisney in July 2017, seeking €4.6 million. It was subsequently taken off the market and was quickly sold by the receiver to the solicitor Joseph Stanley, brother of Michael and Kevin Stanley of Cairn Homes.

To put the upper end of the Dublin market in context, Clonmore, this year’s top sale, would have made only fourth position last year. Similarly, the top open-market sales generally came in below their original asking prices, reflecting a downwards correction in prices.

Worth mentioning in this context were two other sales around the €4 million mark. In Dalkey, 1 Coliemore Villas, an end-of-terrace of just four early Victorians overlooking the sea, quietly sold for €4.2 million early in the year. It was purchased in 2015 by an Australian couple, Karen and Warwick White, for €2.35 million. A lavish refurbishment followed, at an estimated cost of €1.2 million. The buyer is believed to be one of the founders of La Rousse Foods, which Aryzta bought in 2015 in a multimillion-euro deal.

Another quiet sale took place in Rathmines when 2 Temple Gardens, owned by Patrick Roe, popped up on the Residential Property Price Register in September after selling for €4.1 million in an off-market deal. Geralyn Byrne, who brokered the deal, declined to comment on the sale.

On the apartment front, a couple of jaw-dropping sales appeared on the price register midsummer, when the owners of the five-star Merrion Hotel, Lochlann Quinn and Martin Naughton, bought the top two floors of the hotel’s new accommodation wing, for €4.1 million and €7.1 million, respectively, in a transaction dating back to 2014, when the property market was still on the floor.

These sales have been matched by only one other at Dublin’s most-talked-about luxury scheme, Lansdowne Place in Ballsbridge, where the penthouse sold late last year for €6.5 million. The sale has yet to appear on the price register, as the scheme is not complete. These top prices are the highest ever paid for apartments in the State.

The country-homes market in 2018 has been a long, hard slog. A legal delay means the biggest sale fails to feature in the listing: Castletown Cox in Co Kilkenny, probably Ireland’s finest country estate and Palladian mansion, on 200ha (500ac), is understood to have sold since August for more than €20 million, but it has yet to appear on the register.

The deal has become embroiled in a legal row between the UK-based Magan family, who owned the estate from 1999, and a Jersey-administered trust that Lord George Magan (a retired banker and former chairman of the British Conservative Party) had himself established. The undisclosed international buyer was found within just seven months of it listing through Knight Frank with an asking price of €17.5 million. It has been reported that the intended buyer has paid off a €14.5 million borrowing secured on the property in anticipation of closing the sale. When complete, it will be the biggest residential sale in the State since Castlemartin, the former Tony O’Reilly estate, was sold to the US businessman John Malone, for €28 million, in 2014.

This leaves us with a top sale this year of €3.4 million for Dowdstown House in Co Kildare. The Georgian mansion, which sits on just over 10ha (25ac) near Maynooth, has been operated as a stud farm since the 1940s by its Irish-Swiss owners. The property was placed on the market with Sherry FitzGerald Country Homes in 2016, seeking €4.35 million.

Galtrim House, a charming Georgian on 45ha (110ac) in Co Meath that is the former home of Countess Mount Charles, appeared sold on the property-price register in March for €1.92 million. It was originally placed on the market through Savills in 2017, seeking €2.25 million for the entire estate, with an agricultural land value of €1.1 million. It is believed the entire spread finally sold for €3 million, bought by a local businesman to use as a family home. An extensive refurbishment is in the pipeline.

Next up was the sale of Athgarvan House, which stands on the banks of the River Liffey outside Athgarvan village, close to Newbridge, Co Kildare. The 775sq m (8,342sq ft) eight-bed was placed for sale through Sherry FitzGerald in May 2017 seeking €2.5 million and appeared sold for €2 million in June.

The Beach Haus was an unusual property when it came on the market in July. A high-spec Hollywood-style beach house outside Bettystown, Co Meath, was started by an ambitious developer in 2005 and later completed by new owners who bought it in 2013. By October the deal was complete: it appeared sold on the price register for €1.525 million, a sum well in excess of the original €1.25 million asking price. The buyer is understood to be a US-based woman originally from Drogheda who plans to use the property as a holiday home.

Fifth position was also taken by a waterfront property, this time in Co Cork, on Kinsale’s “Golden Mile”. Scilly House appeared sold on the property price register in June for €1.5 million.

Year-on-year comparisons may be clumsy, but when we compare this year’s biggest registered country-estate sale, Dowdstown, at €3.4 million, with the rankings for 2017, it would only have taken fourth position last year. A reflection, perhaps, of pricing needing to come into line with expectations and poor demand for country homes.

How can I ensure my house insurance will cover the cost of a total rebuild?