Take5: An Alpine lodge, an Italian church, a Cyprus farmhouse or a Galway bungalow 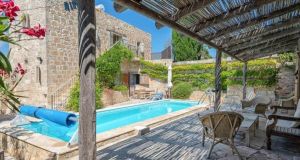 In a village just 4km from skiing at La Plagne, Paradiski, this house offers a traditional alternative to an in-resort apartment at a similar price. The former grange has been renovated to include four bedrooms and four bathrooms along with an open-plan livingroom, dining area and kitchen. On its own grounds, it opens to a terrace. Outside is a small barn; below ground is a vaulted cellar with a wood-burning stove.
Price €350,000
Agent frenchestateagents.com

This 15th-century frescoed church in Sarnano comes with a curator’s house comprising a livingroom, kitchen and two bedrooms. The church, called Madonna di Loreto, has a central nave measuring 17m by 7m with an 8m-high ceiling and is apparently not a protected structure in terms of adjusting the internal layout, such as adding a mezzanine. Or it could work as a studio or yoga retreat. Falconara/Ancona airport is about an hour away.
Price €350,000
Agent cellashirley.com

This 250-year-old renovated stone farm is in Drynia on the edge of Paphos forest. The property comprises a main house with open-plan living/dining (with a wood-burning fire) and kitchen on the ground floor. Upstairs are two bedrooms and a bathroom. The house opens to a veranda overlooking a swimming pool. On the other side of the pool is a building with two bedrooms with en suites that opens to a garden. A further building has a bedroom and roof terrace.
Price €350,000
Agent a20realestate.com

On a hill in Guaro overlooking the countryside, this house with a swimming pool is not just people-friendly but also provides a haven for animals. Beast-bedding arrangements including an aviary, stables, a chicken coop and kennels. The house has a study, livingroom and diningroom with kitchen (plus utility) off it and three bedrooms, one of which has an en suite. The house opens to a covered terrace with barbecue area and on to the pool.
Price €350,000
Agent grapevine-properties.com