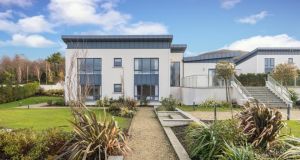 It’s once more with feeling for a luxury scheme launching in Sutton this week. Cluain Aedin, a handsome hillside development of five split-level homes with sea views – more Miami beachfront in design than Bayside semi – has had the longest gestation in Christendom.

The development on Carrickbrack Road has been in the pipeline since 2008, when its original owners, Brian Wallace and Kevin Thompson, had a bold vision to build five properties of more than 300sq m on extensive gardens of up to 0.2ha (0.5ac) apiece. So far so boomy.

The site subsequently sold in 2015, when A-Therm Construction modified the design a little, reduced the floor space and completed the A2-rated showhouse, which launched to market in 2016. The plan was to sell the showhouse and let the other units follow off the plans. It seems the market still wasn’t ready, and although groundwork began on the other four houses, funding fell away. Duff & Phelps was appointed receiver last year. Now the scheme has been fully completed by Weslin New Homes, and it launches this weekend, through joint agents Gallagher Quigley and Kevin Flanigan, seeking €1.35 million for one 230sq m unit and €1.55 million apiece for the other four, 300sq m units.

“The market just wasn’t there for bigger homes like these at the time. Prices have risen since 2016, and we’re still quoting €100,000 less for the bigger units, which were seeking €1.65 million each last time around,” says Conor Gallagher of Gallagher Quigley.

He expects a good take-up for the superspec homes after a prelaunch viewing last week that saw 25 couples through the scheme, about a quarter of whom he reckons are looking to relocate here from overseas.

“I would be surprised if we don’t sell three within the next two weeks,” Gallagher adds, citing the design at Cluain Aedin as the best he has seen for homes of this size. Huge kitchen/living spaces, very high ceilings, a children’s den, hotel-quality bedroom suites and south-facing gardens will tick a lot of boxes for viewers, he believes. Maybe the price – and the market – will finally be right for this ambitious scheme.