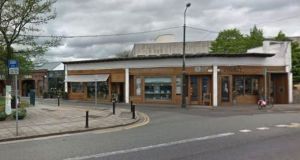 The site in Donnybrook, Dublin 4, for which plans for a six-storey hotel have been lodged. Photograph: Google

Planning permission has been sought for a new six-storey hotel in the heart of Donnybrook on a prime site associated with businessman Denis O’Brien.

A company controlled by Mr O’Brien’s nephew, Emmet O’Neill, submitted an application this week in respect of the site located beside the fire station in the Dublin 4 village. The application from Kouchin Holding seeks to demolish the existing single-storey structures at 25-27 Donnybrook Road and 1-3 The Crescent and replace them with a 78-room contemporary hotel.

The six-storey-over-basement building would feature a reception and bar area extending to 108sq m, a separate restaurant and bar with 175sq m of space, complete with terrace seating, along with a 33sq m private dining room and other associated service areas and facilities.

The site has been the subject of controversy since 2003 when Partenay, an investment vehicle associated with Mr O’Brien, sought planning permission for a landmark 26-storey glass tower. Permission was refused in 2004 by Dublin City Council and by An Bórd Pleanála in 2005.

A scaled-back plan for a six-storey development in 2007 was first granted permission by the city council, but subsequently quashed by An Bórd Pleanála.

In 2009, Partenay teamed up with the city council in a joint venture, combining its site with the forecourt of the adjoining fire station and lands across the street, both owned by the council, and was granted planning permission for an extensive office and retail development.

The planned scheme never came to fruition, and a mix of tenants including a dentist, jewellers and hairdressers now occupy the buildings that were earmarked for demolition.

Hughes Planning & Development Consultants, acting for Kouchin Holding, declined to comment on the newly-submitted plans or on the identity of the Donnybrook site’s beneficial owner. It is unclear whether Mr O’Brien’s Partenay still retains an interest in the site, or if ownership has been transferred to his nephew’s company.

Dublin’s hospitality market is booming, with new restaurants and bars opening at a record pace, and there is an acute shortage of hotel stock.

The motivation to locate hotels, along with their associated lucrative bars and restaurants, in fashionable areas such as Donnybrook should come as little surprise. A similar development, albeit on a smaller scale, is the under-construction Devlin Hotel by Oakmount in Ranelagh – another upmarket suburb not traditionally known for hotel offerings.

Mr O’Neill has, through various investment vehicles, has built up a portfolio of property investments in Dublin. According to company documents, these include the fourth floor of the Ulysses House office block on Foley Street, Dublin 1, and office investments on Pottery Lane in Dún Laoghaire where Celtory, an O’Neill company, owns the Scott Tallon Walker-designed Whitewell House.

Whitewell was offered for sale in 2015 seeking €1.45 million and has since undergone an impressive refurbishment and been rebranded as The Highline. It is probable that Mr O’Neill has also acquired the neighbouring Pottery Road Business Centre, a substantial complex that was offered for sale a year ago seeking €2.2 million, given that his company is now advertising serviced office space for rent in the building, which has also been refurbished and rebranded as The Pottery.

In Clondalkin, another company associated with Mr O’Neill, Chimway, is awaiting a decision by the local council regarding its plans to develop 22 apartments along with 24 surface parking spaces on the site of a disused petrol station on Monastery Road.

Mr O’Neill’s Kouchin Holding has a 20 per cent stake in Chimway, while Kendrick Investments, an Isle of Man-based company previously reported as being controlled by Mr O’Brien, holds the remaining 80 per cent of shares.

A successful entrepreneur, Mr O’Neill has been involved in a number of ventures with links to his high-profile uncle, including a stake in his Quinta do Lago and PGA Catalunya resorts, in addition to holding the position of chief executive at Topaz when it was under Mr O’Brien’s control, prior to its sale to Canadian company Alimentation Couche-Tard.