Saying goodbye to the Merriman Tavern

Drawing pictures for Enya, and singing songs for Planxty was all part of life over the bar in Scariff, Co Clare 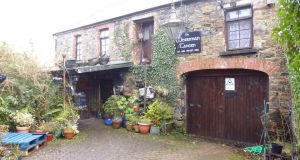 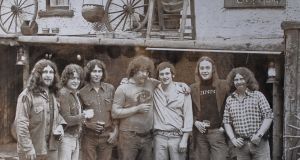 The Furey brothers with Aidan O’Beirne, Arlene Harris’s father, outside the Merriman Tavern

Selling the family home is always bittersweet as the memories and emotions held within the walls often seem too sacred to part with. But when that building is also steeped in history, nostalgia and fame, the parting is much greater.

I grew up in the Merriman Tavern in Scariff Co Clare. The centuries-old stone building once housed a grain mill and in the mid 1900s my grandfather Sean O’Beirne – who lived in and ran a grocery store with my grandmother Kay next door – turned the vast structure into the first secondary school in the region.

Following that, Eamon De Valera made his first speech to the people of East Clare from what would eventually be my parent’s bedroom window and then in the 1960’s, my father, Aidan O’Beirne (along with my mother Sile), transformed the premises again, this time into what would become one of the most important music venues of its time.

Consequently my childhood was full of exciting and interesting people – from Clannad and the Chieftains to Christy Moore and the Wolfe Tones, everyone who was anyone in the trad world played at the Merriman – in fact Finbar Furey credits the place as where he and his brothers played their very first gig together as the Furey’s.

I remember drawing pictures for Enya, singing songs (long after my bedtime) for Planxty and giggling with Brendan Grace (who first performed in the Tavern as a teenager) as he waited behind the stage door dressed as his alter-ego Bottler. On more than one occasion my brother and I would creep downstairs to peek through the rafters at the merriment below and for our own naughty amusement, would often drop bits of fluff onto the heads of unsuspecting punters underneath.

Invariably the band members who played in the bar below would spend the night either in the various rooms of our house above or next door in my grandmothers’ house and the following morning would enjoy one of my mother’s famous fry-ups.

As we got older my brothers and I (along with our friends) would use the stage to perform our own plays or gigs and the nooks and crannies of the old building always made a fantastic backdrop for games like Hide and Seek.

Sadly as the bands became more famous and commanded bigger venues and audiences, fewer people were prepared to travel to a little town in Clare. So in the early 1990s my family shut up shop and moved to London.

A decade later, my parents returned as my Dad dreamed of returning the Tavern to its former glory but the scene wasn’t the same, so they transformed the building again – this time into a restaurant. However, without the music, my father’s heart wasn’t really in it and he struggled to find the enthusiasm to keep it going.

Then tragically, just before his 69th birthday in 2015, my Dad suddenly passed away. Left bereft and shocked, it took some time for us all to come to terms with our loss.

The Merriman Tavern always was and always will be connected with my father and while my mother doesn’t have the heart or the will to carry on the business, my siblings and I have our own lives to lead and quite frankly, couldn’t even begin to fill my father’s shoes – so it is with heavy hearts that we admit that the property must be sold.

Cutting the emotional ties with any family home is hard but when it also connected with the livelihood, income, past and very essence of the family, severing ties becomes even more difficult.

But we know it is a necessity.

And while we are reluctant to part with the building, it’s obvious that it is just ripe for someone else to take up the reins and reinvent the property once again – as a music venue, a restaurant or even a place for children and teenagers to hang out – the options are endless.

Making the decision to sell is the first step and we will deal with the emotions later, but on a practical level, selling a family property in the event of a sudden death leaves a lot of ends to be tied up.

Solicitors and estate agents have to be employed, contents valued and memorabilia, which may not be worth much but seem priceless to the family, given a second home – there is so much to do.

The property which incorporates my grandparent’s house and former grocery store (which is currently being run as a fast-food restaurant and has a sitting tenant) is also going to be included in the sale so this not only adds to the enormity of the task but also means saying goodbye to another generation of family history.

Putting any family home on the market is a wrench, but saying goodbye to this one, which is so steeped in memory, is going to be very tough.

But it has to be done and the sooner we roll up our sleeves and get on with it, the sooner someone else will be able to give it a new lease of life – and that can only be a good thing.

The Merriman Tavern and associated premises is for sale through joint agents Rooney Auctioneers and Green Valley Properties asking €450,000

‘My mother is a controlling, manipulative, narcissistic person'
6