Ruined castles, beautiful views and the Dart: make a move to Shankill

With permission granted for nearly 700 new homes, this sleepy suburb is set to grow 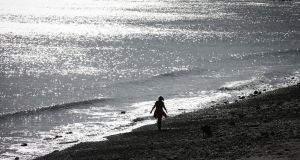 Out for a walk on a bright spring morning on Shankill Beach in south Co Dublin. Photograph: Laura Hutton

Much like its neighbours Killiney and Bray, the south Co Dublin coastal suburb of Shankill was developed in the 19th century as an out-of-town base for well-heeled Dubliners. Now, it’s a village with a gentle and settled pace of life, and a neat main street with shops, a library cafe and pubs. A Lidl and Costa coffee shop have made the area even more liveable. The village is by the beach and has transport links that link it to the city as well as neighbouring villages Bray and Killiney.

It is a historic area with ruined churches, standing stones and castles, and has seen rapid growth in recent years.

Growth isn’t likely to slow down any time soon. The green light was recently given to planners for 685 new homes near Shanganagh cemetery, thought to include 480 apartments, 207 houses and 48 duplexes. Public transport facilities are also planned for the area, including a new Dart station.

Like many areas on the coastline (and Dart line), property isn’t exactly cheap. The beach is stony and could do with being more accessible and buggy friendly. During peak time traffic can be ghastly, with a trip from Shankill to nearby Bray taking up to 30 minutes.

Locals worry that large-scale development may put pressure on existing resources. The BusConnects programme may also take a toll in the future, and is causing concern within the area. Changes to the bus corridors and surrounding roads could potentially mean the removal of many mature trees and hedges, which line most of the route.

At 28 Maryland House, Beechfield Haven, downsizers over 55 can avail of an opportunity to buy a two-bed, two-bath apartment (€289,950, via Castle Estate Agents). The property, within a retirement complex, has the benefit of a direct line to Beechfield Manor nursing home, which is within the complex grounds, offering 24 hour assistance to independent dwellers.

Mill House at Mill Lane, Shankill, is a four-bed, one-bath double-fronted period house with almost 155 square metres of living space (€400,000, via Lisney Dalkey). The property needs total refurbishment but could be make for an interesting project.

Sherrington Cottage on the Dublin Road (€565,000 via Lisney Dalkey) is a three-bed, two-bath home boasting plenty of charm, quirk and privacy.

Young families, meanwhile, might like the sound of 88 Rathsallagh Park (€325,000, via Mitchell Douglas). The three-bed terraced house could use a refresh but is situated near Scoil Mhuire and a cluster of green spaces.

Please note that some or all of these restaurants and cafes may be temporarily closed do to the coronavirus outbreak.

On the main drag, there are casual dining options galore. You can choose between Chinese restaurant Grace’s Garden, above Brady’s Pub (27 Dublin Road), takeaway Bernardo’s (Dublin Road), Andrew’s Chinese Takeaway (2 Main Street) or Camile Thai (Ashwood House, Main Street). Brady’s of Shankill is an award-winning local that serves up decent carvery fare close to the Dart. Cafe Gourmet at the BBQ Centre on Shankill Road offers great coffee and deli fare (and has a handy kids’ menu, too).

Taking a Dart from the city centre, you will reach Shankill station in just over half an hour. The Luas from St Stephen’s Green to Cherrywood is an option. Road-wise, the N11 and M50 are accessible.

“We have lived in the village for 24 years and it really is a wonderful place. First of all it is set between the sea and the mountains, so there are spectacular views of the bay from Bray to Dalkey with Killiney Hill and Bray Head on either end. Then to the west there are the hills with the old lead mines and Sugar Loaf in the distance. We have many natural assets and there are lovely walks to be had.

“The community of Shankill is vibrant and buzzing, with a great mix of young and old. There are a number of schools, churches and shops, and there are many groups and organisations, which cater for a wide variety of interests. The Tidy Towns is very active and we have done very well in the competition in recent years. This is largely down to great community spirit and environmental awareness combined with many natural assets like the beach, Shanganagh Park and the tree-lined roads throughout the village and local estates.” Carol Scott.

Do you live in Wicklow town? If so please tell us what it’s like to live there. Do you have a favourite place or a pet peeve in the neighbourhood? Email homeanddesign@irishtimes.com