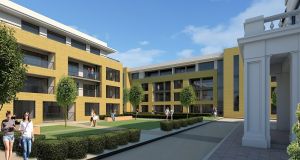 Artist’s impression of Richmond Homes’ planned apartment scheme at Kilmacud House, Stillorgan: construction is due to begin in autumn.

Irish housebuilder Richmond Homes has successfully raised €200 million of fresh capital to advance its ambitious new home development plans here. The company will use the funds, raised in conjunction with the boutique investment bank Hodes Weill, to pursue large-scale development opportunities across the State. It will add to a previous funding round of €100 million which has been largely deployed.

Putting the company’s €300 million capital in context, listed housebuilder Glenveagh Properties had deployed €284 million in capital by the end of 2017, which it believes will result in the delivery of over 7,340 homes. Richmond Homes’ stated target to deliver 5,000 new homes appears on course and may be exceeded, depending on the mix of sites it acquires.

Since its launch last year, the company has amassed prime infill development sites in top Dublin locations, including Clontarf, Donnybrook and Ballsbridge. It has also acquired numerous sites elsewhere in areas where there is demand for new homes, including Ardee, Co Louth, where it has purchased a 68-acre site with planning permission in place for 144 houses and long-term potential to accommodate about 500 homes in total.

The company is targeting similar large-scale housing sites countrywide, both in the greater Dublin area and in locations such as Cork, Limerick and Galway, where very limited new home construction has taken place in recent years. Richmond is currently in active negotiations with various landowners, and it is understood a number have entered into exclusivity agreements to sell their lands.

In Dublin, Richmond Homes continues to build out its existing sites and secure planning permission for new developments. Its first scheme, Dawson Place in Arbour Hill, sold out with two-bed houses priced from €445,000 and three-beds at €535,000, while its latest new homes scheme, Ashfield Place on Templeogue Road, is launching next week. In April, the company was granted planning permission by An Bord Pleanála for a 55-unit apartment development at Kilmacud House, Stillorgan, where construction is due to begin in autumn.