The collecting bug: ‘I’ll have to ask my husband for more shelves’ 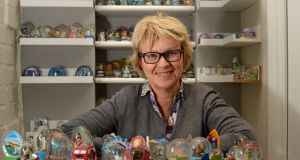 Bernadine Grogan, from Palmerstown, Dublin, with some of her snow globe collection. Photograph: Dara Mac Dónaill

Some years ago, a family friend spotted a collection of rusty Castrol GTX cans hanging on a clothes line outside a neighbour’s house in Co Cavan. When he asked about their purpose, the owner of the cans simply replied, “Everyone should have something that nobody else has.” It seems that many are following his advice.

Tom Hanks collects typewriters, Johnny Depp has dozens of limited-edition Ken and Barbie dolls and Penelope Cruz has more than 500 varieties of coat hangers, while Terence Conran’s array of Bugatti pedal cars hang on a wall of his house, though his first collecting passion was moths.

Why do people collect? Why is it so satisfying? Collections are evidently deeply personal. I began collecting matchboxes in my 20s. I spent much of the decade living between New York, London, Paris and my home in Co Monaghan and realised that the slender, often beautifully decorated matchboxes in my collection acted as a diary of all the nightclubs, restaurants and hotels I’d visited . Lighting the fire or a candle at home with one of those matches makes me feel connected to another time.

“You only need two to start a collection,” says Bernadine Grogan, who has more than 200 ornate snow globes at her Dublin home. “I’ve been collecting for about 15 years, and whether I buy them or they are given to me, I put the date on each one, along with where it came from, be it Portugal or Toronto. My son trawled the markets of Thailand to find a snow globe for me.”

Her husband built a special set of shelves for the expanding collection.

“Every globe has a story, a memory,” says Grogan. “When a new one arrives, I like to reorganise my collection, and it’s a real pleasure. I dust them and make sure they are laid out in a way that they look good to the eye.” Her most cherished globe came from St Petersburg and was gifted to her by a close friend who had travelled to Russia to adopt a son and a daughter.

When going on holiday, Grogan makes sure to bring her own bubble wrap, just in case she spots a snow globe. “I don’t want perfume or ornaments as a souvenir,” she insists. “All I want is a snow globe.” As such, she now receives a new globe at least once a month. “When I met my hairdresser the other day, she said ‘Look what I have for you!’ At this rate, I’ll have to ask my husband to build me another new set of shelves.”

Alex and Daria Blackwell of Kilmeena, Co Mayo, are accomplished sailors, and avid collectors of buoys. “I’ve been collecting them since early childhood,” says Alex. “I think we’ve reached the point where we have too many to count and not enough to stop collecting.”

Some of the buoys that now adorn their maritime garden like necklace beads were collected when the Blackwells sailed their yacht, Aleria, across the Atlantic from Long Island to their house on Clew Bay in 2008.

“We collect buoys wherever we sail,” says Daria. “Last year we found some in Spain and Portugal. Others come from Scotland and all around the Caribbean. I love the more unusual colours, like black, and occasionally pink, or orange, or even glass.”

Getting them home can be quite a challenge. “We found a lovely big steel one on a beach and rolled it all the way to our car with a stick through it like a wheel,” says Alex. “Then there was another on an uninhabited island, which we had to heave into a dinghy in order to bring it out to the boat. Sometimes you have to think outside the box about how to get them home.”

In their Mayo garden, they have stacked some of the buoys on top of one another to form sculptures. “So not only are we cleaning up the shore of these stray buoys,” says Daria, “it brings out our creative side too.”

“When I was gifted my first pair of yellow and black Nike high-top dunks, that was the moment I became hopelessly hooked, like love at first sight,” says Cliff Mann, who now has more than 300 pairs of sneakers at his home in Shannon, Co Clare. Influenced by a London-based uncle, Mann spent his teenage years learning about the role of sneakers in the hip-hop and rap scene in the US.

Mann, who follows a multitude of sneaker trends, is particularly complimentary about designs by Kanye West.

“Kanye is a style icon, whether you like him or not – his impact between sportswear and fashion and how he fused the worlds together has been staggering.”

One of Mann’s favourite models is the Nike SB Dunk, known as the “chicken and waffle”, which combines a “craziness of colour and material, making the sneaker actually look like a toasted waffle”.

“My sneakers are stored in their boxes in my bedroom. I’m lucky that I have space. If I lived in a city apartment, I’d have real problems; I know many collectors who live among their stacks and stacks of boxes! Last week I won a pair of limited-edition off-white x Nike Air Force 1. I’ll always have room for more.”

“I suppose I have a fetish about doors,” says Geoffrey Cope of Shankill Castle in Co Kilkenny. Having assembled almost two dozen doors into his collection, it’s no surprise that his family affectionately refer to him as “Mordor”.

“I can’t bear to see doors being discarded,” says Cope, “so I have created a sort of orphanage for them.”

He is particularly fond of the weighty doors from the Victorian and Georgian era, which have been heavily painted. “To have two or three generations worth of paint on a door is something I’m inclined to respect. I would never sand a door down.”

This stands in marked contrast to the doors made of sheeting in the 1970s. “They’re not even plywood,” he says of the latter. “Anyone could put a fist through them.”

Geoffrey likes doors to be sturdy and functional. “I notice that some pubs now are hanging doors in places that don’t need a door. I have a door from a confession box, which I rehung in a bedroom in our gate lodge, but generally I only put doors where needed. I don’t see them as works of art.”

Such practicality does not hinder his passion.

“I have a soft spot for doors that other people have stopped loving,” he says. “They need to be loved. It’s door rescue, I suppose. I’ll happily show my doors to anyone but I’d never sell one of them.”

10 common instances of fatphobia, and how to react to them