Priced out of the property market? These homes are just €1 each

The only catches? You have to completely renovate them. And they’re 2,700km away 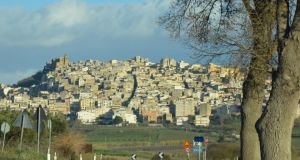 Priced out of the Irish property market? Then you might want to consider buying in Sicily, where one town is selling dozens of homes for as little as €1 each.

Sambuca, near the western tip of the Italian island, hopes the offer will revive its fortunes by tempting people to move to the town, whose population has been in decline as locals have moved to cities.

The two-storey Moorish homes, which range from 40sq m to 150sq m, need complete overhauls – their reddish-pink stone is crumbling – but they feature courtyards, palm gardens with orange and mandarin trees, and terraces with stunning views. From some you can even see Mount Etna, more than 200km away, on the clearest days.

Local officials say anyone who’s interested can buy one of the homes almost immediately. “As opposed to other towns that have merely done this for propaganda, this city hall owns all €1 houses on sale,” Giuseppe Cacioppo, the town’s deputy mayor and tourist councillor, told CNN. “We’re not intermediaries who liaise between old and new owners. You want that house, you’ll get it in no time.”

The only catch is that buyers must spend at least €15,000 refurbishing their properties over the next three years – and pay a €5,000 security deposit that they’ll get back only once the work has been done.

But Cacioppo says they won’t be disappointed. “We’re located inside a nature reserve, packed with history. Gorgeous beaches, woods and mountains surround us. It’s silent and peaceful, an idyllic retreat for a detox stay.”

CNN calls the town, which was founded by the Ancient Greeks, “an open-air museum, a patchwork of contrasting architectural styles”, where “churches with round Arab-looking domes sit next to Baroque palazzos with glazed tile floors, decorated with smiling cherubs, fearsome gargoyles, twisted columns, allegorical statues and coats of arms.”

It adds: “This is where Sicily’s Arab soul lies. Most houses on sale are located within the ‘Saracen District’, a kasbah maze of arcaded stone portals and winding narrow alleys (less than a meter wide) through which people squeeze.”

“Foreigners are flocking here, flabbergasted by all this beauty,” Cacioppo says. “Some 10 houses have already been sold. Dozens of others are available but badly in need of a makeover. We’ve been contacted by people from Switzerland, France and Spain and are receiving many requests.”

One buyer who is anxious to move in – she is currently restyling her home – is Susanna Heinson, from Germany. “I can’t wait to spend next summer in Sambuca,” she says. “It’s a lovely, special place. The people are very open-minded and friendly. Good restaurants, great wineries. We feel at home.”

Interested? You can email the town council about the offer at case1euro@comune.sambucadisicilia.ag.it.