Property Clinic: We have been in the process of selling a property for the last two months 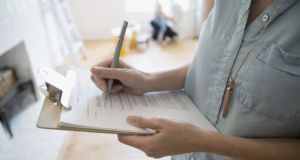 The valuation was carried out in February 2020. Photograph: Getty Images

Over the last two months we have been in the process of selling a residential property at a valuation made in late February 2020 and in line with similar properties selling locally. In light of the coronavirus environment our potential purchasers are making an inquiry about the current accuracy of this valuation, as it was made just before the pandemic became a serious issue here.

They make a valid point that if the property were going on sale at this present time it’s unlikely the valuation of two months ago would be reached. We are all keen to keep the process moving but acknowledge if we “put ourselves in their shoes” we’d agree their concern is valid.

First, it is important to distinguish between a fall-off in transaction activity, which undoubtedly is occurring, and a negative impact on price levels, of which I personally have seen little evidence so far in the Meath/Kildare area, where we are based.

The property website Myhome.ie reported 730 properties sale agreed for the first week in March, and this figure had fallen to 228 for the last week in April, while its listings for new properties coming onto the market are down 80 per cent compared to the same period last year. Furthermore, the amount of time to move a property sale along from sale agreed to sold has lengthened owing to a number of factors, and with very few viewings taking place at present, some properties newly listed may well require extended marketing periods. These factors each point to a reduction in transactional activity – suiting neither sellers nor buyers.

At the back of it all of course is the economic impact of coronavirus, and the view banks take on lending. Clearly where employment is negatively impacted banks are unlikely to lend at previous levels. Then there are cases where buyers are caught between having contracts exchanged and sale closure and are unable to progress their purchase until their employment is restored to pre-pandemic level.

All of that said, my experience to date is that the bulk of sale agreed properties are progressing at the original sale agreed price, albeit at a slower pace than the vendors and purchasers would like. In my practice we are not renegotiating prices as a result of the pandemic.

A number of buyers’ employment have been temporarily affected and these transactions cannot complete until they return to work, but many other sale agreed deals are moving along. We are experiencing an issue with most valuers and surveyors unable to inspect properties as a result of the travel restrictions, although not in all cases.

Contrary to some media commentary, I do not hear banks requiring valuers to include a coronavirus “haircut” in the valuations, however I do know that valuers are including a reference to “material valuation uncertainty” due to, among other things, a lack of current comparable evidence on which to base their opinion of value. Their difficulty is trying to judge how much the market has moved without the numbers.

There has also been some commentary and speculation about price drops of somewhere between 5 per cent and 10 per cent with perhaps Dublin being affected more, but quite frankly we won’t know until later in the year when the restrictions are lifted and transaction levels return.

I often say that the decision to buy is based on sentiment, the ability to buy depends mostly on access to finance. I have spoken to a number of buyers who remain in the market – they recognise negatives but their circumstances dictate that they still want to buy. In cases where their jobs are not affected, they remain satisfied to buy now. Where buyers have their mortgage approval in place, they have no desire to allow that to lapse and go through the lengthy process again.

Your buyers seem to be second guessing the valuation and I’m not sure what stage you are at in the process. If the bank valuation has been carried out, then there should not be an issue. Unless of course the valuation is over three months old – most have a three-month validity for mortgage lending – or the bank has requested an updated one on the grounds of market changes.

If not, and it looks as if you’ve been sale agreed for two months, then the sale is not progressing quickly enough. You should encourage your buyers to have a structural survey carried out, and progress to contract exchange. Whatever your buyer’s negotiating tactics might be, you need to know asap if you have “deal on” or “deal-off”. Only then can you focus on completing the deal or restart the marketing campaign. – Ed Carey

Ed Carey is a chartered residential agency surveyor and member of the Society of Chartered Surveyors Ireland, scsi.ie