Paint, plants and paddling pools: what Ireland went wild for at the hardware store 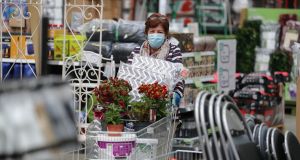 Queues and re-openings, Woodies Bray, GV’s from the store this morning. Treasa Dunne from Bray in the store. Photograph Nick Bradshaw

When the doors finally opened at Woodie’s DIY after weeks of lockdown, buyers went wild for flowers, buying bagloads of geraniums making this old-fashioned, sun-loving bloom the chain’s number one seller in terms of volume, across its 35 stores. All types of bedding plants sold well, says marketing director Suzanne Quinn, with over 10,000 units gone in just a day and a half. That’s a lot of colour. Over at B&Q, showy dahlias were the top sellers, pushing geraniums into second position across the brands eight Irish shops.

After flowers, patio sets and pressure washers were the top-selling big ticket items, while at B&Q paint topped the best-selling list. It was the same story at hardware outlets under the Topline umbrella, which supplies 160 independent hardware and builders’ merchants across the country. Customers chose muted shades such as Dulux Weathershield’s Cobblelock, the colour of sand after a light shower and Fleetwood’s Weatherclad Wild Atlantic grey, the colour of the western summer sky when rain is about to hit, while those buying fencing panels chose to coat them in Ronseal’s Fencelife, in a light Scandinavian shade called dark oak, explains Hugh O’Donnell, Topline’s CEO.

Expert Hardware, a buying and marketing group for independently-owned hardware and DIY stores, saw a huge demand for fence and shed paint with many moving away from the traditional shades, such as browns, red and black to more vibrant colours like cornflower, sage and midnight blue, says its CEO, Gerry Fallon.

Decwells DIY on Dublin’s South Great George’s Street sold “tonnes” of paint, says manager Michael Foley, while it was a similar story across town at Murdocks Builders Merchants in Kilbarrack, where pale shades of white and magnolia were the most popular, according to assistant manager Darren Egan.

Paint and garden furniture topped the sales at Homevalue builder merchants & DIY stores too, but toys to keep the kids active and occupied also made it onto their top 10 best-selling list. The paddling pool was this chain’s number six best-selling item, while swing sets came in at number eight and goal posts for home games at number nine.

It seems Decklanders, the boom-era socio-economic group identified by economist David McWilliams, are back with a vengeance and have been clamouring for timber and plywood, the second best-selling item at Topline stores. These materials can be used for new house builds or to support building a deck. Decking itself and sleepers come in at number four in Topline’s top 10, says O’Donnell. As well as decking, many of the DIYers at Murdocks were also making their own garden benches, Egan says.

The group’s third best-selling items are fence panels and posts, not typically a May purchase, he says. It is usually bought after storms when fences blow over, but people are looking for things to do, O’Donnell says. He believes those of us lucky enough to have an outdoor space have used working on the garden as an excuse to escape the confines of the house.

Every Topline customer has came armed with a to-do list, something that’s been compiled over the long weeks in lockdown. The pattern was the same at Woodie’s DIY, says Quinn. “The days of browsing are gone. On Monday people were coming in on a mission. Every single customer bought.”

Decorative stone, a type of garden gravel used to break up areas within the space and to help keep the weeds down, is Topline’s fifth best-selling item. With many customers not going to get away on holidays this summer they’re adapting for the staycation by making the garden “resort ready” is how O’Donnell puts it. Even his wife has gotten in on the act, buying a 25kg bag for personal use.

At Expert Hardware personal protective equipment was the number one request. Facemasks of all types and hand sanitiser topped everyone’s list. “People want hand sanitiser with them at all times as it is not always possible to wash hands while out and about,” Fallon says.