A two-storey over garden Victorian grande dame with contemporary features 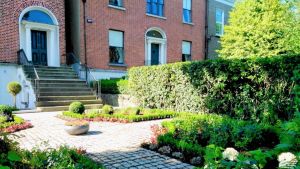 The houses on opposite sides of the road near the Harold’s Cross end of Leinster Road are of completely different architectural design and stature.

According to the owner of 71 Leinster Road, the tall imposing two-storey-over-garden grande dames were built for senior officers of the army – with larger rooms, taller ceilings and views to the Dublin Mountains – while the smaller villa-type properties opposite – were built for more junior officers.

Though it had suffered through lack of use, the owners fell for the property with the intention of making it their family home and the fact that it needed no significant structural work was a bonus, as they live abroad.

“It married the classic period proportions with contemporary features such as central vacuuming and under-floor heating and just needed a cosmetic overhaul. We had intended it to be our family home as it was close to schools, but as we are remaining overseas we never got to live there.”

Its size will appeal to anyone upgrading to a bigger family home in Dublin 6.

The property has four fine bedrooms and two elegant reception rooms with tall ceilings, original fireplaces and cornicing. But new owners will more than likely spend most of their days at garden level, where a sun room, informal dining room, kitchen, utility and snug provide ample room for a family’s day-to-day living.

Over the past five years the gardens have been transformed from a state of complete neglect to pristine well thought-out green spaces.

Landscaper John Kilfeather was tasked with creating a private parterre to the front of the property, which takes advantage of the privacy offered by a towering copper beech tree. The sunken parterre allows coffee in the morning sun hidden away from the bustle of the traffic beyond. Completed in 2019, it is laid out with year-round colour and requires minimal maintenance.

The rear garden and house itself were renovated in 2015 in a project that took six months. While the interiors required a cosmetic finish – all the structural work had been completed by previous owners – the garden was given an overhaul by George Downer Landscapes.

Here two separate paving areas – accessed from a sun room at garden level – were laid out to catch the path of the evening sun; with the furthest patio designed for barbecues.

To the rear of the garden, clever double hedging cordons off the parking area which can accommodate two cars. There is an opportunity to develop this space into a mews, subject to planning. There is precedence for same among houses on this terrace as their rear garden back onto Grosvenor Lane.

The property is in turn-key condition – though new owners may want to sand and varnish the floors in the two reception rooms at hall level – and is now on the market through Sherry FitzGerald seeking €1.875million.

What is the going rate for a home in...Co Kilkenny?
9

What will €105k buy in Spain, France, the US, Morocco and Co Monaghan?
Real news has value SUBSCRIBE