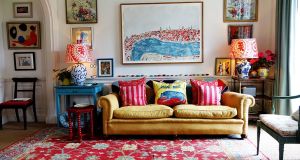 The television room is a comfortable and cosy space. The contents of the room are a real junk shop mix with a lot of the furniture found at car boot sales. The Persian rug is the anchor for the room and everything fits together around it. Photograph: by Christopher Simon Sykes.

In her new book, A Place Called Home, Cath Kidston gives readers a peek inside her own country house, showcasing her carefree and colourful use of antique furniture set against flamboyant prints and textiles.

Kidston, famous for her vintage floral designs, started life as an interior designer having trained with English society decorator Nicky Haslam, focusing on vintage and recycled furniture before she eventually opened her own shop in London.

Kidston credits her English country house childhood as the inspiration for her designs and love of antiques. A love of all things shabby chic runs in the family; her cousin is the property TV presenter Kirstie Allsopp, a baron’s daughter who guides Channel 4 viewers through the ups and downs of househunting and home-making.

It appears that from a young age, Kidston – surrounded by antiques at home – developed a lifelong love of pre-owned and vintage furniture, but she not for her the perfectly ordered room with reverently placed antiques. Instead, she mixes old with new and paints antiques furniture to give it a new lease of life.

Her book showcases her home Paradise, a rambling manor house tucked away at the edge of the Cotswolds valley. The one time farmhouse dating from the 17th century immediately captivated her: “When we walked in I had that heart-stopping moment when I felt I could have been at home, and the feeling completely overtook me.”

Here, in the interiors-meets-memoir, she reveals her design process along with the memories and motivations behind her style choices, sharing stories and decorating tips. The house, after initial renovations is now a fantastic blend of classical features, period furniture – some of which are painted to give a country style effect – and eclectic pieces collected over the years.

But most of all it has a lovely lived-in feel rather than a stuffy over polished look where a single dog hair would ruin the effect.

The eclectic décor uses a bronze branch sculpture by Dan Chadwick that hangs over an impressive period fireplace flanked by old tables and two old Dutch panels in the formal living room. A nod to humour is the old portrait in the hallway, where a Christmas cracker hat hides a bald patch on the rather regal-looking squire in an old master painting.

The kitchen is simple and timeless. Here colour is added to the old table and chairs in the form of vintage china and cushions, where it is all a bit of moveable feast by changing the tablecloth.

One of the most interesting – and most used – rooms in the house is the television room where bold blues, reds and yellows create a dramatic backdrop against the pale white walls. An old side table has been given a rough petrol blue coat, while period blue and white lamp bases now have contemporary red and white shades, and to great effect.

These colours were chosen from the hues in the artworks, mostly painted by her great-aunt Corise. The contents are a real junk shop mix with many items sourced at car boot sales, and is the perfect example how old furniture – given a lick of paint – can be transformed into country style chic at very little cost. It is all pulled together by a vast Persian rug, which Kidston sourced for her husband record producer Hugh Padgham, when they first met while was employed as his interior decorator

But the real beauty in her style is its uniqueness, as it can never be found in a catalogue or bought to order, instead it has been sourced over the years from auctions and bric-a-brac shops.

In the castle bedroom, Kidston used random pieces of fabric to create a headboard and scatter cushions, in blush pinks that marry really well with old pieces of furniture – including what appears to be an upholstered antique garden seat. Here again, an old rug – this time Moroccan – sits in front of an old demi lune table that has been whitewashed to give a more country house feel to the room, with colours from the rug echoed in an antique chair covered in bubble gum pink.

Her upholstery days date back to a time in 1993 when an error with an order left her with a surplus of duvet covers. Kidston took to her sewing machine and transformed the excess bedlinen into cushions, padded clothes hangers and washbags which eventually led to a vintage-inspired empire of chintzy prints that was once estimated to be worth £250m.

The Cath Kidston brand began in 1993 as a single shop in Holland Park, a well-heeled area of west London, where Kidston sold homewares with polka dot designs in bold colours that evoked a vintage ideal of suburban serenity. She once described this store as a “glorified junk shop” and her first catalogue was created from instant camera photographs and photocopied pages.

By 2003, her roses and polka dots found their way on to thousands of everyday objects from phone cases, laptop sleeves, tents, tea towels and shopping bags in collaborations with Tesco, Marie Curie Cancer Care and Nokia, to become one of Britain’s fastest growing retailers. By 2015, after expansion in the Middle East the brand had in excess of 200 shops worldwide.

But after this period of growth and international expansion, sales stagnated and last month the company announced that it was to permanently close its 60 UK stores – and the two stores in Ireland which are on Grafton Street and Kildare Village – after the Coronavirus lockdown. Only 32 of its 940 staff would retain their jobs after lockdown, with the company opting for a “viable digital business” instead.

In 2017, after stepping down from the Cath Kidston Group, she founded a new solo venture, Joy of Print, a creative design studio specialising in designing print for the interiors and fashion world.

Her brevity with colours is really a lesson for us all. Be brave with splashes – but allow them to shine against neutral backdrops.

And if there was masterclass in the use of period furniture – whether upcycled with a splash of colour or left as they were when first handcrafted – Kidston does it with absolute flair. Not only does it have a unique aesthetic appeal, it supports a greener environment against what has become the toxic implications of fast or throwaway furniture.

Planning a move to Australia? Here’s everything you need to know
6